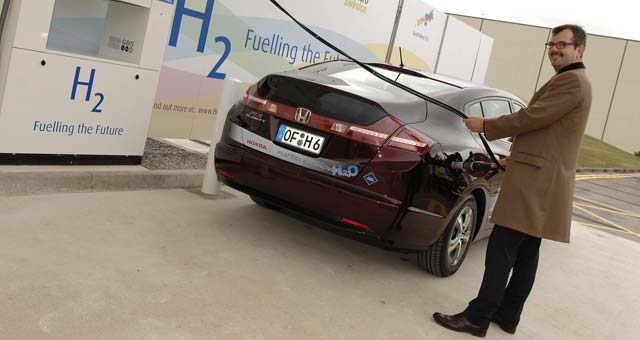 FCEVs utilize hydrogen to produce electricity through a chemical process, without combustion. This means FCEVs are zero-emission vehicles that produce no tailpipe pollution and now with the SAE standard, these vehicles can be fueled similar to today’s petroleum vehicles. The standard enables hydrogen fueling at both 35MPa and 70MPa pressures.

Jesse Schneider, lead of the J2601/J2799 SAE standards for hydrogen fueling explained, “After 13 years of testing and development with the international automotive and hydrogen industry, the publication of SAE J2601 establishes the standard for which the first generation of commercial hydrogen infrastructure will be built. With this, the consumer can be confident that fueling FCEVs will be done safely and within three-to-five minutes resulting in a high State of Charge. This high SOC equates to a more than 300+ mile (500km) range. Using J2601, FCEV is the only Zero Emission Vehicle technology that equals the conventional fueling experience and range.”

This standard release follows the May 2014 publication of Vehicle-to-Station Hardware and Software standard for FCEVs (SAE J2799) which standardizes wireless communication of the tank temperature and pressure between the FCEV and the hydrogen station. “The standard, SAE J2799 also will result in slight increase in State of Charge allowing an even greater driving range,” Mr. Schneider added.

“Many of the world’s premier automotive companies plan mass-production of FCEVs starting this year, thousands of FCEVs are already on the road through leasing arrangements and private fleet purchases, and public and private fueling stations are operating across the country, with many more planned for completion through 2015,” said Mr. Markowitz. “SAE’s decisions make it easier for more consumers to safely own and operate FCEVs today, tomorrow and in the years ahead,” he concluded.