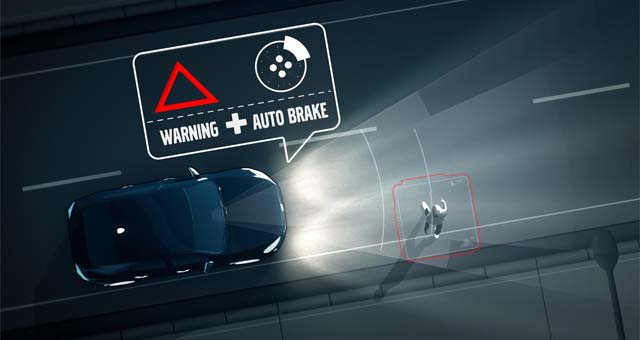 The all-new Volvo XC90 – which will be revealed in August – will offer the most comprehensive and technologically sophisticated standard safety package available in the automotive industry.

The standard safety package on the all-wheel drive, seven seat premium SUV will include two world first safety technologies: a run-off road protection package and auto brake at intersection capability. These innovations will form part of a suite of safety features that will make the all-new XC90 one of the safest cars ever made.

World first number 1: Run-off road protection
Run-off road is a common accident type with different causes, such as driver distraction, fatigue or poor weather conditions. For example, half of all traffic fatalities in the United States are road departure accidents, while in Sweden, single-vehicle accidents involve one third of all fatal and severe injury crashes with passenger cars.

Volvo Cars developed Safe Positioning to address these situations. The Safe Positioning capability means that in a run-off road scenario, the all-new Volvo XC90 detects what is happening and the front safety belts are tightened to keep the occupants in position. The belts are firmly tightened as long as the car is in motion.

To help prevent spine injuries, energy-absorbing functionality between the seat and seat frame cushions the vertical forces that can arise when the car encounters a hard landing in the terrain. The solution is capable of reducing the vertical occupant forces by up to one third. This counteracts spine injuries, which are serious and relatively frequent consequences of these situations.

World first number 2: Auto brake at intersections
The XC90 is the first car in the world with technology that features automatic braking if the driver turns in front of an oncoming car. This is a common scenario at busy city crossings as well as on highways, where the speed limits are higher. The all-new Volvo XC90 detects a potential crash and brakes automatically in order to avoid a collision or mitigate the consequences of a crash.

Broad range of Safety features for the all-new XC90

There is a wide range of other safety innovations available on the all-new XC90. They include the following:

Pre-crash protection in rear impacts
Rearward facing radars detect if a rear impact is imminent and safety belts are tightened in advance in order to keep the occupant in a good position. Lights also start flashing to warn the driver behind, and the brakes are activated to help reduce the impact on the occupants.

Groundbreaking rollover prevention and protection
The all-new XC90 comes with the latest generation Roll Stability Control as standard. The system uses advanced sensors to calculate the risk of rolling over. If the risk is assessed as high, engine torque is restricted and some braking force is applied to one or more wheels to counteract the rollover tendency.

If a rollover is inevitable, the Inflatable Curtains are activated. They cover all three seat rows for an extended period of time to help prevent head injuries.

All seven seats in the XC90 have pyrotechnical safety belt pre-tensioners that also activate in rollover situations.

City Safety auto braking functions
City Safety will become the umbrella name for all of Volvo Cars’ auto brake functions – which are standard equipment in the all-new XC90.

The purpose of the new collision avoidance system is to assist the driver in case there is a high risk of collision with another vehicle, pedestrian or cyclist through an intuitive warning strategy and a brake support system. If a collision is almost unavoidable, the system will provide autonomous braking when the driver fails to respond to the imminent threat.

Extended Road Sign Information
The XC90 is the first car on the market with Road Sign Information technology as standard. It has been further enhanced to show an extended selection of road signs in the digital display in front of the driver, such as various types of supplementary signs.

Covers the blind spots
The Blind Spot Information System informs about vehicles in the blind spots. It also alerts the driver to vehicles that are approaching fast from behind.

Stronger in every sense
To help keep the occupant space inside intact in a crash, the all-new XC90 has literally been made stronger in every sense. This is achieved by more extensive use of hot-formed boron steel, which is the strongest type of steel presently used in the car body industry.

The complete safety cage around the occupants is made from hot-formed boron steel and is designed for maximum occupant protection in all types of crash scenarios. The hot-formed steel amounts to about 40 per cent of the total body weight.

For a reminder, the all-new Volvo XC90 will offer a range of Drive-E engine options, all of which provide an outstanding combination of performance and fuel-efficiency. The top of the range ‘Twin Engine’ will carry the badge ‘T8’ and be a plug-in electric car, hybrid car and high-performance car rolled into one.[wzslider height=”400″ lightbox=”true”]