Hyundai Tucson Fuel Cell Will Lease For $499 Per Month 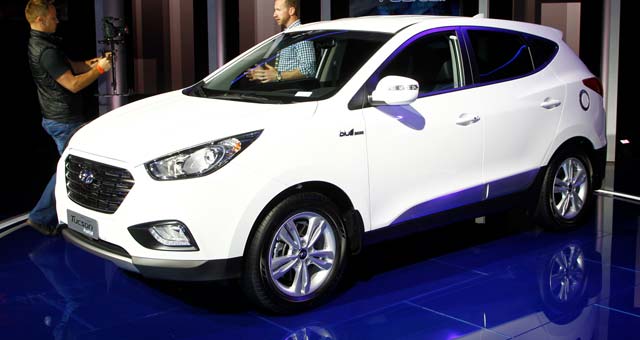 Hyundai announced plans to offer its next-generation Tucson Fuel Cell vehicle for the U.S. market for just $499 per month, including unlimited free hydrogen refueling and At Your Service Valet Maintenance at no extra cost.

For the first time, retail consumers will be able to put a mass-produced, federally certified hydrogen fuel cell vehicle in their driveways, with availability beginning in Spring 2014 at several Southern California Hyundai dealers.

The Hyundai Tucson Fuel Cell will initially be offered to customers in the Los Angeles/Orange County region for $499 per month for a 36-month term, with $2,999 down. This includes the addition of a remarkable new addition to the Hyundai Assurance program –unlimited free hydrogen refueling.

In addition, Tucson Fuel Cell owners will enjoy all the same services of the Hyundai Equus “At Your Service” valet program. As Equus owners have enjoyed since its introduction in 2010, should a Tucson Fuel Cell require any service, a Hyundai dealer will pick up the vehicle and provide a loaner, then return their car after service to their home or business, at no charge.

Customers interested in the Tucson Fuel Cell can indicate their interest (the first step in the ordering process) beginning today by visiting Hyundai.com.

The Tucson Fuel Cell represents the next generation of electric vehicles – those that create their own electricity, on-board, from hydrogen. According to UCI’s Advanced Power and Energy Program’s 2013 study, the hydrogen fuel cell provides lower total well-to-wheel emissions than a battery electric vehicle.

For the Tucson Fuel Cell driver, this social benefit is achieved with greater utility, versatility and without compromises. Consider:

Hyundai is also partnering with Enterprise Rent-A-Car to make the Tucson Fuel Cell available to consumers at select locations in the Los Angeles/Orange County region. This partnership will enable interested consumers to evaluate the Tucson Fuel Cell for their lifestyles on a multi-day basis, with rental availability also planned for Spring 2014.[wzslider height=”400″ lightbox=”true”]