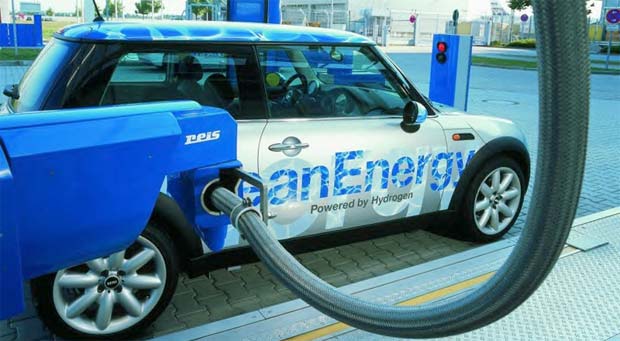 Hydrogen fuel cells have a lot of promise as an alternative fuel source, but making them practical on a large scale requires them to be more efficient and cost effective.

A research team from the University of Central Florida (UCF) may possibly have identified a solution for this.

The majority of hydrogen fuel cells use catalysts made of a rare and expensive metal – platinum. There are few alternatives because most elements can’t endure the fuel cell’s highly acidic solvents present in the reaction that converts hydrogen’s chemical energy into electrical power. Only four elements can resist the corrosive process – platinum, iridium, gold and palladium. The first two are rare and expensive, which makes them impractical for large-scale use. The other two don’t do well with the chemical reaction.

They created a sandwich-like structure that layers cheaper and more abundant elements with gold and palladium and other elements to make it more effective.

The outer monoatomic layer (the top of the sandwich) is either palladium or gold. Below it is a layer that works to enhance the energy conversion rate but also acts to protect the catalyst from the acidic environment. These two layers reside on the bottom slice of the sandwich — an inexpensive substrate (tungsten), which also plays a role in the stability of the catalyst.

“We are very encouraged by our first attempts that suggest that we can create two cost-effective and highly active palladium- and gold-based catalysts –for hydrogen fuel cells, a clean and renewable energy source,” Stolbov said.

By creating these structures, more energy is converted, and because the more expensive and rare metals are not used, the cost could be significantly less.

Stolbov said experiments are needed to test their predictions, but he says the approach is quite reliable. He’s already working with a group within the U.S. Department of Energy to determine whether the results can be duplicated and have potential for large-scale application.

If a way could be found to make hydrogen fuel cells practical and cost effective, vehicles that run on gasoline and contribute to the destruction of the ozone layer could become a thing of the past.