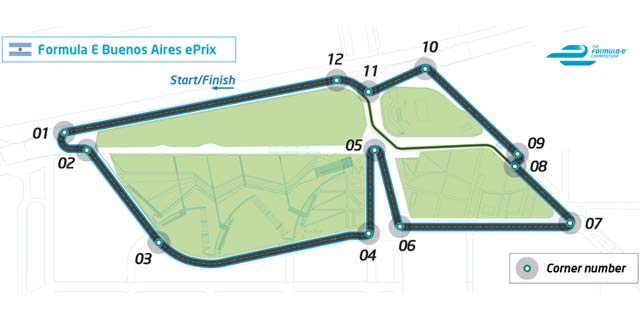 Formula E Holdings has today unveiled the circuit layout and location for the 2015 Buenos Aires ePrix, host for round four of the new all-electric FIA Formula E Championship.

Taking place on January 10 2015, the 2.44km anti-clockwise track lies in the popular and modern Puerto Madero district to the east of the Argentine capital of Buenos Aires. It has been designed by Santiago Garcia Remohi and features 12 turns including a mix of high-speed corners, chicanes and hairpins.

The Buenos Aires ePrix has been welcomed by Mayor Mauricio Macri, along with the City Government, local authorities and the ASN. The race is one of two in South America along with Punta del Este in Uruguay (Round three) on December 13 2014.

The Buenos Aires ePrix becomes the fifth track to be revealed by Formula E organisers, with the roads surrounding Beijing’s Olympic ‘Bird’s Nest’ Stadium forming the season opener, followed by a race though the centre of Putrajaya in Malaysia for round two. Punta del Este’s picturesque coastline provides the venue for round three with round seven taking place in Long Beach, Southern California, using a modified version of the city’s historic street circuit. The remaining tracks will be released approximately six months prior to the race.

Formula E is the FIA’s new fully-electric single-seater championship designed to appeal to a new generation of motorsport fans, whilst accelerating the interest in electric vehicles and promoting sustainability. Competing entirely on city-centre circuits – with races also in China, Malaysia, Uruguay, USA, Monaco, Germany and the UK – it uses cars capable of speeds in excess of 150mph (225kph). Its 10 teams and 20 drivers feature some of the leading international names in motorsport including Alain Prost and Michael Andretti, along with high-profile environmental supporters including Sir Richard Branson.