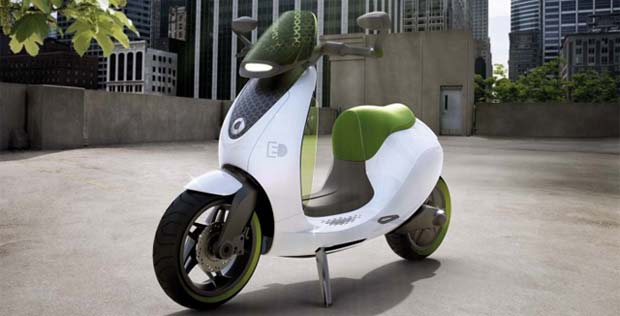 Daimler has confirmed today the production of a new Smart eScooter with a target launch date in 2014.

The new all-electric scooter was previewed by the ‘eScooter concept’ at the 2010 Paris Motor Show alongside the pure-electric eBike that is already available for sale and the fortwo electric drive, which will launch on the market this summer.

“Just like the eBike, the eScooter will also be available for customers who as yet have no driver’s license for cars,” said Daimler in a statement.

The 2010 eScooter concept had the equivalent to 5.4 hp (4 kW electric motor), which allowed a maximum speed of 28 mph (45 km/h) with range of more than 62 miles (100 kilometers). The eScooter concept featured tantalizing details, such as the integration of smartphones via a specially designed cradle in the center of the eScooter’s handlebars. A Smart drive kit app for the concept provided such functions as speedometer, range indicator and a navigation system.

Daimler said that the design of the escooter will be “developed and refined further” before it reaches showrooms in 2014.