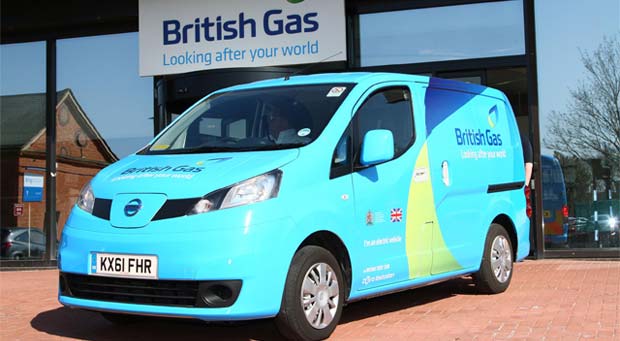 Nissan’s e-NV200 TEST CAR has played its part in helping British Gas kick-start its ambition of switching 10% of its 14,000 light commercial vehicle (LCV) fleet to electric over the next three years.

British Gas has been trialling a Nissan e-NV200 TEST CAR for a few weeks at its Leicester and Newbury depots, the first OEM van of its kind ever to grace the fleet.

Its job has been to help British Gas determine which of its 14,000 drivers’ daily travel patterns are most suited to an electric van’s typical working range, including getting to and from work.

The e-NV200 van was run at maximum gross vehicle weight during the trial which shadowed drivers from British Gas’ national network of trained engineers as they carried out their daily duties of servicing millions of domestic and business customers across the UK. In that time the van covered over 1,200 miles.

The Nissan e-NV200 electric van, which is likely to be a production version of the LEAF-look alike e-NV200 concept, was revealed at the Detroit Motor Show in January.

The Nissan e-NV200 shares its major drivetrain components with the innovative Nissan LEAF. Silent, zero emission power is supplied by a lithium-ion battery composed of 48 compact modules and a high-response 80kW AC synchronous motor that generates 280Nm of torque. Unlike a conventional internal combustion engine, the motor delivers 100% of its torque from start with immediate response bringing excellent acceleration and smooth, comfortable driving feel.

“British Gas, as a leading energy supplier, is already at the forefront of supporting electric charging innovation in the UK through specialist advice and the installation of charging points for both business and home. With electric cars and vans coming of age, we feel the time is now right for us to introduce electric vans into our fleet and we are currently evaluating the benefits they can bring to UK fleets by implementing them into our own,” explained Colin Marriott, general manager of the British Gas fleet.

“With fuel prices continuing to rise, one of the biggest benefits of e-NV200 is the breakthrough in long term running cost savings,” he added.

Another task of the e-NV200 TEST CAR has been to put drivers into an EV sometimes for the very first time and get them used to their performance characteristics and the charging procedure.

Nissan is running a global proving test with large commercial fleets to find out how the e-NV200 TEST CAR performs under real operating conditions. It has already undergone trials with the Japan Post Service and FedEx in the UK, and British Gas is the latest company to contribute to the pre launch activities. So far it has received positive comments for its CO2 reduction, driving comfort and generous carrying capacity and payload.

Nissan has a close working relationship with British Gas as it has been its preferred supplier of home and office electric charging points for LEAF EV customers since 2011.[wzslider height=”400″ lightbox=”true”]