Electrified car sales surpassed 100,000 units in Europe for the first time in March 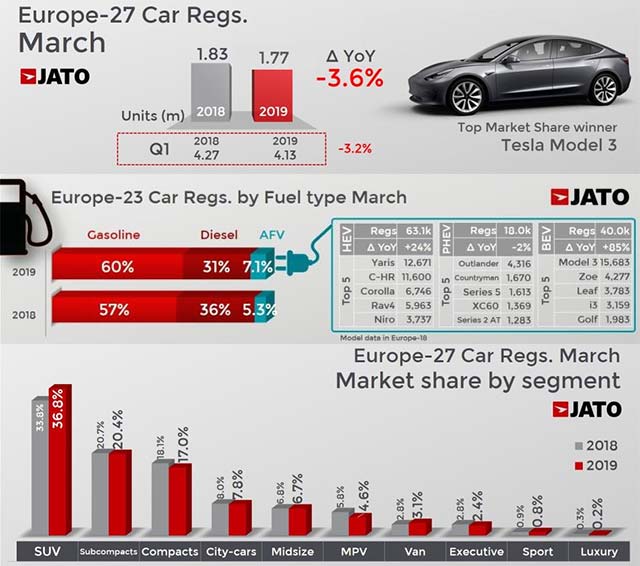 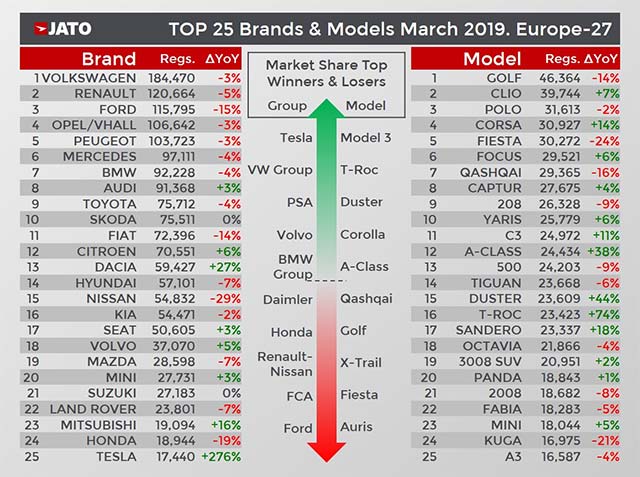 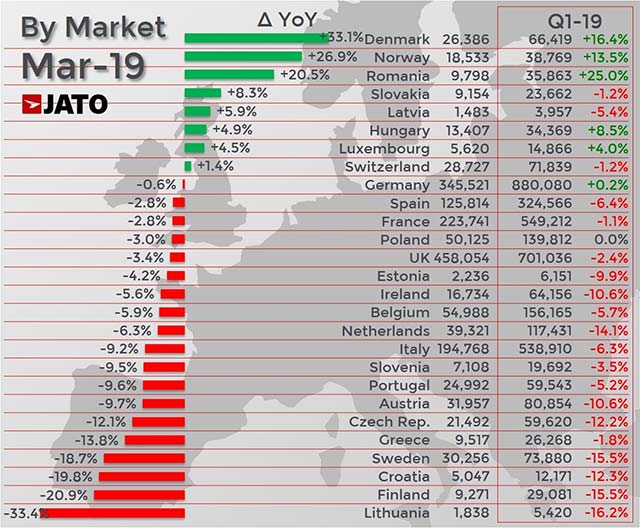 The European car market registered its seventh consecutive month of decline in March 2019. Ongoing political and economic uncertainty, including lack of clarity around Brexit, alongside consumer preoccupation with diesel bans in cities, meant that overall demand continued to decline.

Last month, 19 of the 27 markets included in this release posted negative results – including the top 10 largest markets in Europe. The figures for Q1 provide a broader snapshot into the downward trend, with only 6 countries recording growth.

While overall demand may be on the decline, the good news is that the electrification shift continues at pace, with a significant result in March. It was the first time that registrations of electrified cars (BEV, PHEV, HEV) exceeded the 100,000 units mark, with a total of 125,400.

Demand was up by 31% – mostly driven by German, Norwegian, Spanish and Dutch registrations. Electric and plug-in hybrids counted for almost half of that total, but the real driver of growth was the BEV, whose registrations increased by 85%.

The rapid volume growth of pure electric cars was mainly due to the outstanding results of Tesla. Thanks to strong demand for the Model 3 the brand entered the top 25 best-selling brands in Europe. Registrations of the Model 3 jumped from 3,747 units in February to 15,755 units in March – meaning it was Europe’s top selling electric car.

At the same time, diesel cars continued to lose ground. Last month, they recorded the lowest monthly market share since September 2000. Total diesel registrations counted for 31.2% of total volume against 36.2% in March 2018, and 44.8% in March 2017. Despite the big drops posted last year it seems that concern among consumers is still affecting demand, and the trend has not hit rock bottom yet. The biggest drops were posted by Mercedes, Renault, Peugeot, Ford and Land Rover. In contrast, Volkswagen, Skoda and Seat saw increases in diesel registrations.

The market continues to be dominated by SUVs, but their growth is slowing. In March, SUV registrations totalled 650,300 units, or 36.8% of total volume. However, their sales performance is not as strong as it has been in the past, with volume growing by “only” 5%. Volume was up 11.7% for small SUVs, and 5.3% for compact SUVs. The rest of the SUV market posted declines. VW Group, Renault-Nissan and PSA led the SUV segment in March and in Q1.

The VW Golf continued to lead the European ranking by models, despite a 14% drop in volume in March. The best performer of the top 10 was the Opel/Vauxhall Corsa, which posted strong growth in the UK, Germany and France. The Corsa is an older product but sold almost the same quantity of units as the Volkswagen Polo, whose latest generation has been in the market for about a year.