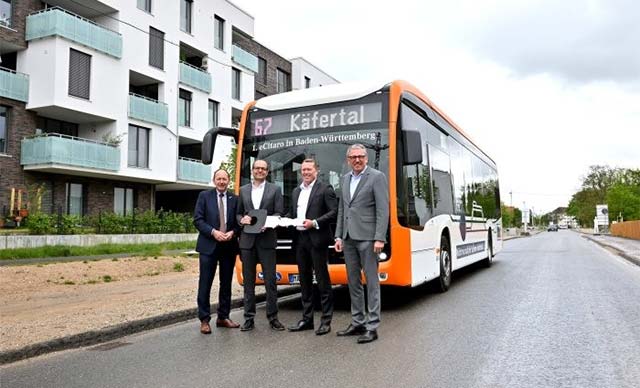 Flexibility and maximum mobility, less pollution and the best possible comfort; for RNV these issues are particularly important to the operation of their new electric bus routes in the northern area of Mannheim.

For around 600 people already live in the new town district of Franklin. And today, almost 700 people work in Taylor, the newly developed trading estate – the plan is to increase this number to around 1500. For the companies located there, the new electric bus route 66 is an attractive locational advantage with ecological added value.

This also applies to the Daimler Competence Centre for Emission-free Mobility (CEM) which has a manufacturing plant in the middle of the industrial estate and which is directly involved in the production of the eCitaro. The new electric bus route 67, on the other hand, improves both the quality of life and living for the families in the district of Franklin. The eCitaro bus on this route also stops at schools and thus serves as a school bus for the children.

Rhein-Neckar-Verkehr GmbH began operating its first electric bus route in Heidelberg in January 2019. The company was thus one of the first transport companies in Germany to incorporate the Mercedes-Benz eCitaro in its daily bus route operations. In Heidelberg RNV operates three eCitaro buses in the historic areas of the city.

As the municipal transport company for the cities of Heidelberg, Ludwigshafen and Mannheim RNV connects the three German states of Baden-Wuerttemberg, Rhineland-Palatinate and Hesse with its local public transport operations.