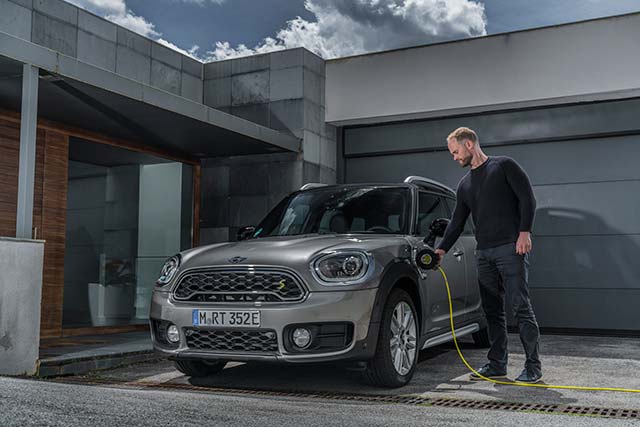 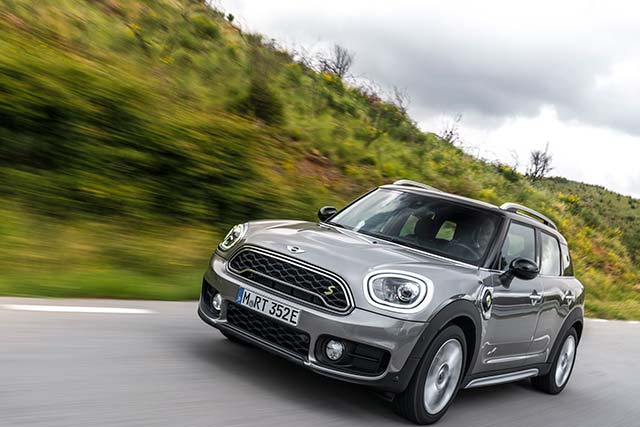 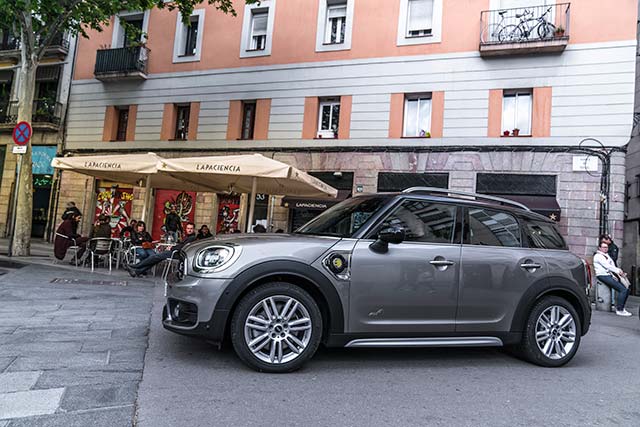 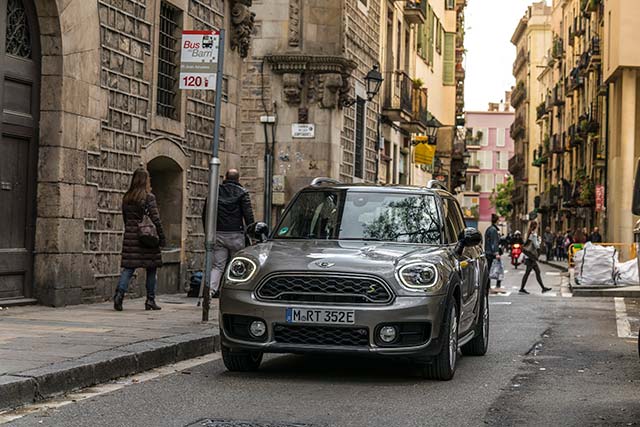 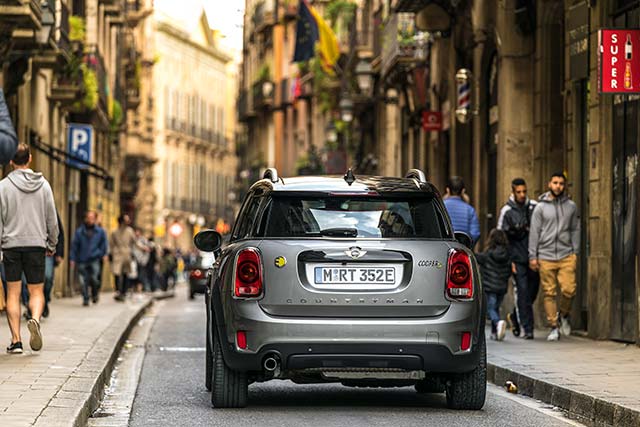 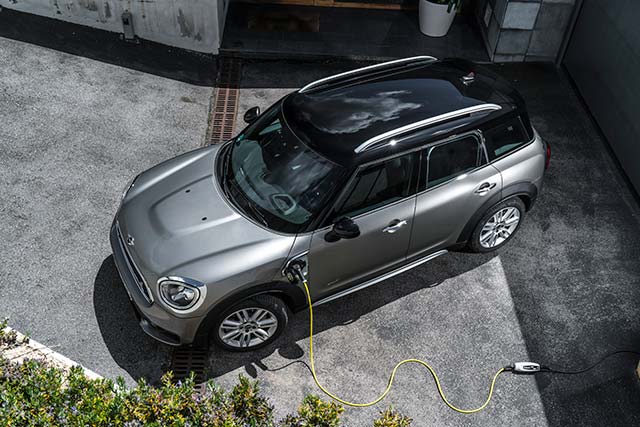 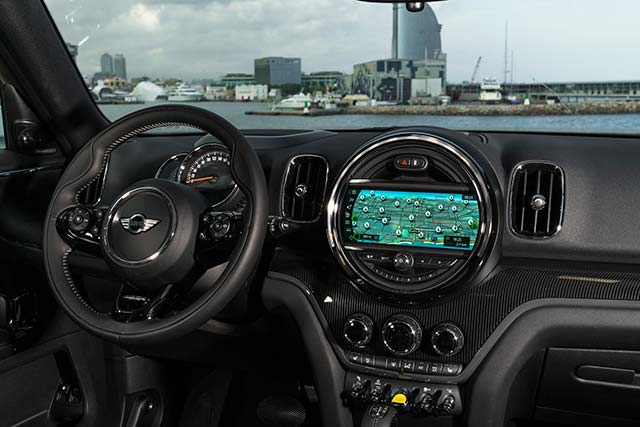 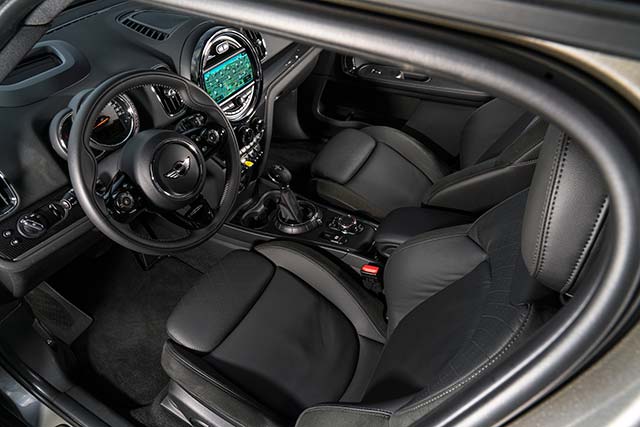 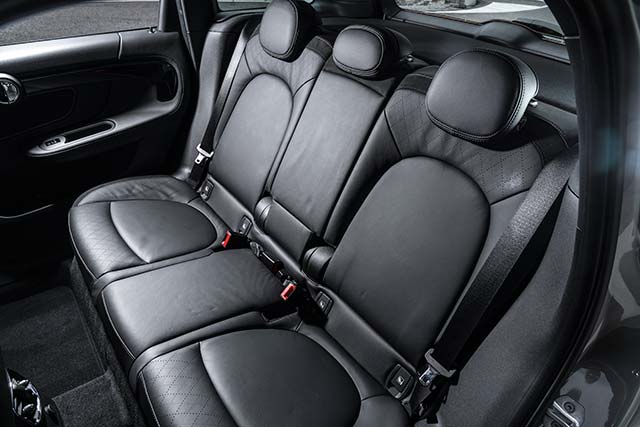 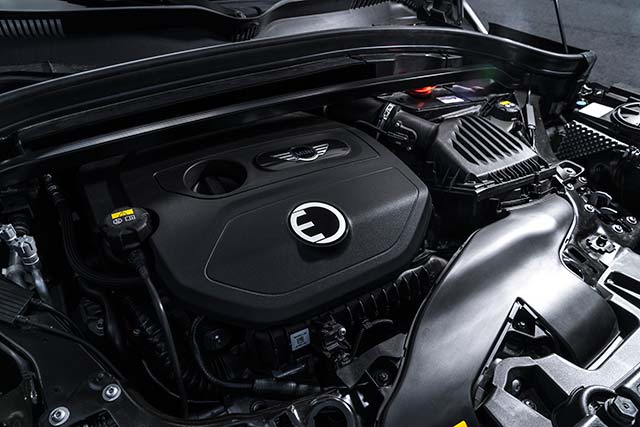 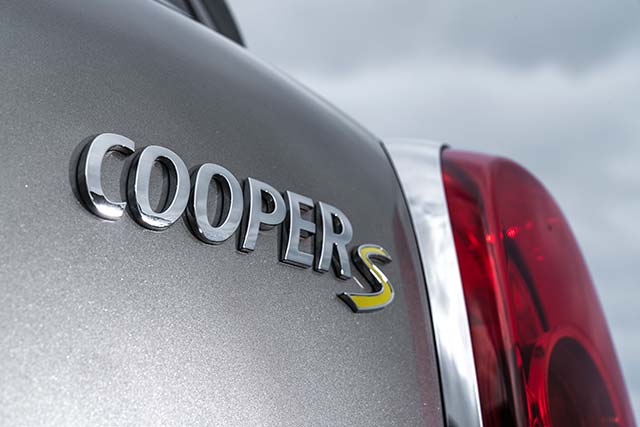 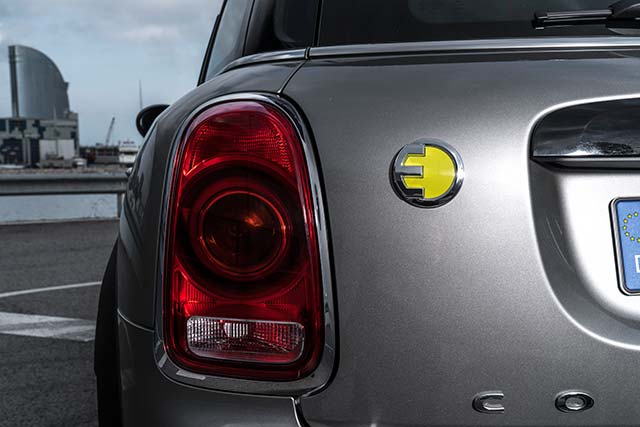 The MINI Cooper S E Countryman ALL4 is the first model of the British premium brand in which a plug-in hybrid drive provides the option of mobility that is purely electric and therefore emissions-free, in addition to offering the thrill of athletic agility and supreme versatility.

The job of providing efficient forward propulsion is shared between a 3-cylinder petrol engine and a synchronous electric motor. Together they produce a system output of 165 kW/224 hp. Equally impressive is the average fuel consumption of 2.3 – 2.1 litres per 100 kilometres (112 mpg US or 134.5 mpg UK) and the CO2 emissions figure of 52 – 49 grams per kilometre (EU test cycle figures for plug-in hybrid vehicles). The MINI Cooper S E Countryman ALL4 is thus the perfect vehicle for urban target groups who wish to enjoy the benefits of purely electric mobility when commuting between home and work every day, for example, while at the same time benefiting from unlimited long-distance suitability at the weekend.

The MINI Cooper S E Countryman ALL4 combines the variable space concept of the new model generation’s largest member with the sustainability of BMW Group eDrive technology and an electrified all-wheel drive system. The front wheels are powered by the combustion engine, the rear wheels by the electric motor. The MINI Cooper S E Countryman ALL4 is able to run on electricity alone not just in urban traffic but far beyond, too – at a top speed of 125 km/h (78 mph) and with a range of up to 42 kilometres (26 miles). Drawing on the power of both drive forms, it offers driving fun away from surfaced roads, too.

MINI TwinPower Turbo and eDrive technology combined
The plug-in hybrid drive of the MINI Cooper S E Countryman ALL4 combines the best of two worlds. The familiar space under the bonnet is occupied by a 3-cylinder petrol engine with MINI TwinPower Turbo Technology from the latest generation of the BMW Group engines. From a capacity of 1.5 litres this mobilises a peak output of 100 kW/136 hp. The maximum torque of the engine is 220 Newton metres, which goes on stream at 1 250 rpm. In the MINI Cooper S E Countryman ALL4, the combustion engine is combined with a modified 6-speed Steptronic transmission. This transfers its power to the front wheels based on the characteristic MINI principle.

The second power unit of the MINI S E Countryman ALL4 is an electric motor that is housed under the luggage compartment floor. Designed according to the principle of a hybrid synchronous motor, the electric drive offers an output of 65 kW/88 hp – which is particularly high considering its size and weight – and generates a maximum torque of 165 Newton metres that is characteristically available directly from standing. In addition, it provides constant power delivery even in high engine speed ranges as well as a very high level of efficiency. The electric motor directs its power to the rear axle via a two-stage single-speed transmission.

Lithium-ion battery
The lithium-ion battery is positioned directly in front of the electric motor underneath the rear seat. It is made up of five modules, each comprising 16 battery cells, and like the electric motor it is produced at the Dingolfing plant, the BMW Group’s competence centre for eDrive technology. The high-voltage battery has a capacity of 7.6 kWh. At a wallbox with a charging capacity of 3.6 kW it can be fully charged in 2:30 hours. Charging at a regular household socket takes 3:15 hours.

Intelligent energy management optimises driving fun and efficiency
The intelligent energy management system controlled by the power electronics of the plug-in hybrid system ensures that the interplay between the combustion engine and the electric motor is optimised for both driving fun and efficiency in all situations. Using the power of the electric motor alone, the MINI Cooper S E Countryman ALL4 is able to provide locally emissions-free driving fun with hallmark brand spirit in many situations in day-to-day traffic.

In the event of more intense acceleration, the electric motor supports the combustion engine via a boost function. A total system output of 165 kW/224 hp and a combined torque of 385 Newton metres are available for athletic sprints. The MINI Cooper S E Countryman ALL4 accelerates from zero to 100 km/h in 6.8 seconds.

Two power units, four drive wheels
Only one of the two power units is used when the car is moving, while the other one can be additionally enabled at any time to optimise traction, ride stability and agility. The signal required for this purpose comes from the Dynamic Stability Control (DSC) unit, which permanently analyses both the situation on the road and the driver’s wishes. “The result is an intelligent all-wheel drive system that ensures perfect movement in all weathers and on all road surfaces,” explains Uwe Seitz, MINI Cooper S E Countryman ALL4 project manager.

The precisely controlled interaction achieved in the powering of the front wheels by the combustion engine and the rear wheels by the electric motor is the same as the principle that is applied in the BMW i8, only the other way around: it is a key factor that contributes to the exceptionally fascinating character of the plug-in hybrid sports car.

In the standard setting AUTO eDRIVE, the MINI Cooper S E Countryman ALL4 runs on electrical power only up to a speed of 80 km/h. At higher speeds and in the case of very intensive loads, the combustion engine is automatically enabled in addition. In MAX eDRIVE mode the vehicle is powered by the electric motor alone at speeds up to 125 km/h. What is more, the SAVE BATTERY mode can be selected so as to relieve the capacity of the high-voltage battery or raise its charge state to at least 90 per cent so that sufficient electrical power remains for locally emissions-free driving later on.

If the MINI Cooper S E Countryman ALL4 is fitted with a navigation system and route guidance is activated, the anticipatory energy management system ensures that appropriate sections of the route are run on electric power alone. Taking into account the navigation data, the operating strategy of the hybrid system is geared towards drawing on the energy capacity of the high-voltage battery to maximum extent.

Versatile and variable in the interior, too
Thanks to the compact structure and arrangement of the eDrive components, the plug-in hybrid model variant of the new MINI Countryman has a versatile interior. The high-voltage battery is housed underneath the slightly raised rear seat, as is the 36-litre fuel tank. When all seats are in use, the luggage compartment volume in the MINI Cooper S E Countryman ALL4 is only slightly less than in the conventionally powered model variants.

The rear backrests offer the possibility of a 40:20:40 split; they can also be folded down and varied in their tilt angle. “The entire hybrid technology is installed in such a way that you don’t notice it inside the car at all,” says Uwe Seitz, MINI Cooper S E Countryman ALL4 project manager, “with the exception of the controls used to activate the various driving modes.”

Hybrid-specific design features and displays
Discreet but equally unmistakable indications of the pioneering character of the car’s drive form are provided by the model-specific design features on the MINI Cooper S E Countryman ALL4 exterior. The connection for the charging cable is under a flap in the area of the left-hand side scuttle. Other features are the model-specific “e” badge on the side scuttles and also a yellow “S” in the model inscription on the rear as well as on the radiator grille and door sill finishers.

The special features of the cockpit include a yellow start/stop unit at the centre of the toggle switch panel and a performance display in the instrument cluster on the steering column. The MINI Cooper S E Countryman ALL4 comes as standard with the Radio MINI Visual Boost featuring a 6.5-inch colour screen in the central instrument. In addition to the MINI Country Timer, this also displays information such as the charge state of the high-voltage battery and operating mode of the hybrid drive selected by eDrive toggle switch. In conjunction with the optional Wired package including MINI navigation system Professional, operation is via an 8.8-inch screen with a new graphic design and touchscreen function as well as via the Touch Controller in the centre console.

Fittings: efficiency meets individual style
The MINI Cooper S E Countryman ALL4 combines highly efficient driving fun with the variable space concept and all the other advancements that characterise the new edition of the all-round model for the premium compact segment. Its powerfully expressive design and optimised use of space are just as striking as its increased ride comfort and refined premium ambience. The MINI Cooper S E Countryman ALL4 comes with the MINI Driving Modes as standard. Regardless of the operating mode selected via eDrive toggle switch, the vehicle set-up can be adapted to a particularly sporty or efficient driving style, according to preference.

MINI is a pioneer in the field of electric mobility
The BMW Group’s technological expertise and range of models have given it a leading role in the area of electric mobility. MINI was an early pioneer here: the MINI E presented in 2008 was the BMW Group’s first ever purely electrically powered automobile and was driven by private users in everyday traffic as part of a large-scale field experiment. More than 600 of this vehicle based on the MINI Cooper were used for practical testing purposes worldwide.

The project yielded vital insights into the use of electrically powered automobiles, and these were incorporated in the development of the BMW i3.

May 10, 2017Blagojce Krivevski
MINI Cooper S E Countryman ALL4 UK debut at Goodwood Festival of SpeedBYD delivers 60-ft all-electric bus in the US