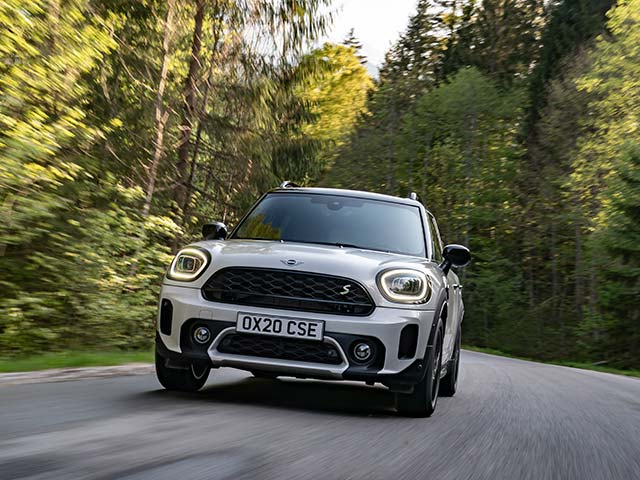 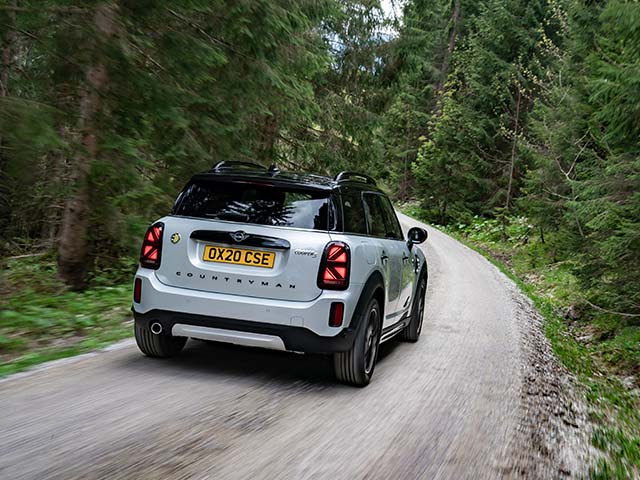 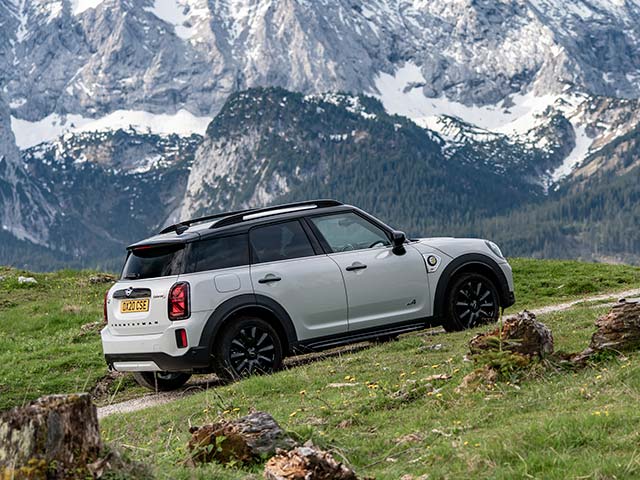 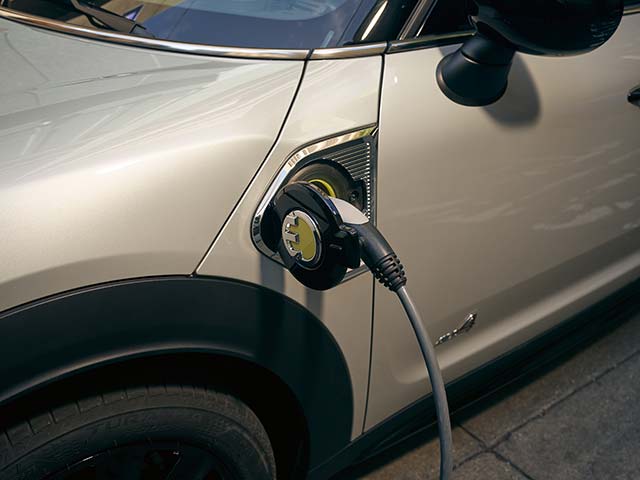 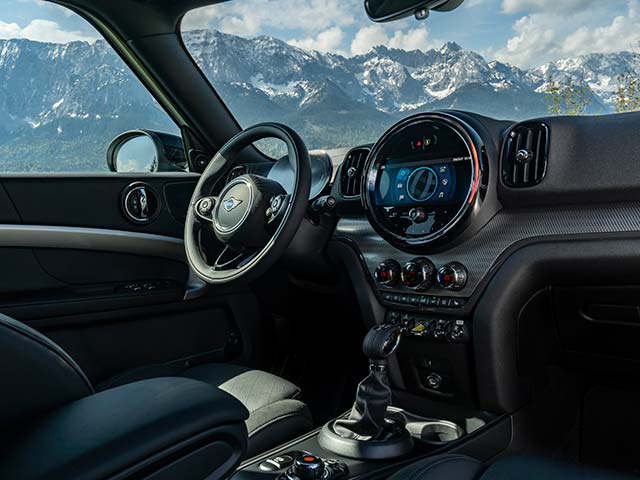 The biggest and most versatile member of the MINI model family generates fresh stimuli for driving pleasure and individual flair in the hallmark style of the British premium brand. Precisely refined design, attractive additions to the equipment range and innovative technology in the areas of operation and networking underpin the exceptional status of the new MINI Countryman within the premium compact segment.

Its robust vehicle concept, an ample, versatile interior with five fully-fledged seats and the optional ALL4 all-wheel drive system make it an unmistakable all-round talent that inspires typical MINI enthusiasm not just in day-to-day traffic but also on long-distance trips and even when venturing into unsurfaced terrain. The progressive character of the new MINI Countryman is reflected in a model variant with plug-in hybrid drive as well as in new digital MINI Connected services. What is more, the desire for individualisation is catered to more radically than ever before with the range of additional optional extras and Original MINI Accessories.

With the new MINI Countryman, the tradition-steeped British brand continues to pursue its conquest of additional target groups. Even in its first generation, the MINI Countryman was a pioneer. As the first model with an exterior length of more than four metres, four doors, a large tailgate, five seats and all-wheel drive, it laid the foundations for the brand’s highly successful advance into the premium compact segment. The MINI Countryman now accounts for almost 30 per cent of the brand’s new registrations worldwide.

The launch of the current model generation once again sees a significant optimisation in terms of space, versatility, functionality and ride comfort. In addition, the MINI Countryman has become a pioneering force for locally emissions-free mobility in hallmark brand style. The plug-in hybrid model MINI Cooper SE Countryman ALL4 combines groundbreaking efficiency and hybrid-specific all-wheel drive with the option of purely electrically powered driving pleasure.

In addition to plug-in hybrid drive, the new MINI Countryman is available with three petrol engines and three diesel engines featuring the latest MINI TwinPower Turbo Technology. Four of them can be combined with the all-wheel drive system ALL4 on request.

The new MINI Countryman: an overview of the highlights

Thanks to its unmistakable proportions, the new MINI Countryman is instantly recognisable as the brand’s largest model. The three-part structure of the vehicle body that is typical of MINI is interpreted in a particularly striking way by the model-specific roof line. The car’s upright stature and increased ground clearance are suggestive of generous interior space, robust character and inspiring driving characteristics – both on-road and off-road. The optional MINI ALL4 exterior look and the roof rails – also available as an optional extra – further underline the versatility of the new MINI Countryman. Meanwhile the aerodynamically optimised exterior features contained in the optional John Cooper Works package add an extra touch of sporty flair.

The precisely modified design of the car’s front section lends even more intense emphasis to the powerful charisma of the new MINI Countryman. The new structure of the bumper covering, now entirely in body finish, ensures a particularly clear-cut and high-quality appearance. The redesigned radiator grille has the hexagonal contours that are typical of MINI and is surrounded by a slim, one-piece chrome frame.

The redesign of the front section adds LED headlamps to the standard trim in the new MINI Countryman: here, the latest version of these lights features a particularly high-quality design that emphasises the technology used. The distinctive, slightly asymmetrically rounded contours of the headlamps are accentuated by a continuous band of light that takes on the function of both daytime driving light and turn indicator. The turning light included in the functional range of the LED headlamps provides intensive illumination of the side areas of the road when changing direction. The standard trim of the new MINI Countryman also includes LED fog lights, with a light band in the upper semicircle of each fog light serving as a parking light.

Adaptive LED headlamps with variable light distribution and matrix function for high beam are available as a newly added option. In addition to the turning light, they also provide bend lighting, automatically adapting their effect to the traffic situation and weather conditions. In urban traffic and when visibility is limited due to the weather conditions, the side area of the road is illuminated more intensely by adding the dimmed turning light. When driving on motorways it is possible to selectively increase the range of the high beam.

What is more, the adaptive LED headlamps in the new MINI Countryman now feature an automatic selective dip function for the high beam. For this purpose, the high beam is subdivided into four segments that can be activated and deactivated independently of each other and adapted to the situation on the road at speeds of over 70 km/h. As soon as the front camera of the new MINI Countryman detects an oncoming vehicle or a vehicle driving ahead, the space that vehicle occupies is only illuminated at low beam brightness, while the other high beam segments continue to illuminate the rest of the road in the normal way. As such, the matrix high beam is able to increase the range of vision while at the same time avoiding any dazzle effect on other road users.

With its redesigned bumper trim, the rear apron also contributes to the particularly powerful and contemporary look of the new MINI Countryman. The upright rear lights with chrome frame provide an exclusive, unmistakable accentuation that evokes the origins of the British brand. All lighting functions now feature high-quality LED technology as standard, while the graphic structure of the light source traces the pattern of the Union Jack. With its striking lines, the flag motif provides a distinctive form of identification – both during the day and in terms of night design.

The range of body finishes opens up new possibilities for an individual look, including the newly added colours White Silver metallic and Sage Green metallic. Depending on the model variant, the roof and mirror caps of the new MINI Countryman can be finished in black, white or silver as an alternative to the body colour.

The Piano Black Exterior option – likewise new and available for all variants of the new MINI Countryman – ensures a particularly striking appearance: here, the headlamp surrounds, rear lights, radiator grille and side indicator elements – or side scuttles – are finished in high-gloss black instead of chrome, as are the door handles and the model lettering on the luggage compartment lid. Additional identification features in high-gloss black are available from the range of Original MINI Accessories, including the MINI logo and the “Cooper S” and “ALL4” inscriptions in Piano Black design. Matching exterior mirror caps and side scuttles with a grey-black flag pattern in Night Jack design are also available for retrofit.

Interior: ample space and even greater scope for individual style

The new MINI Countryman combines versatile driving characteristics with a versatile interior. Three fully-fledged seats are available at the rear. Alternatively, the second row of seats can also be used to expand transport capacity. By folding down the rear seat with a 40 : 20 : 40 split, storage space can be extended from 450 to up to 1 390 litres.

Selective customisation of the interior oriented towards the customer’s personal style has become even more attractive due to the addition of new options and a further developed product range. The leather variants Chester Indigo Blue and Chester Malt Brown have been newly added to the selection of seat upholstery options. The Colour Line for the lower section of the instrument panel and door trim, previously available as a single option, is now an integral part of the leather trim designed to match the relevant colour scheme.

The MINI Cooper S Countryman, MINI Cooper SD Countryman and MINI Cooper SE Countryman ALL4 models now come as standard with Piano Black interior surfaces for the cockpit and door bezels. These are combined with accentuation strips in the variant British Oak dark. A new version of the highly exclusive MINI Yours interior surfaces is optionally available for all model variants. The optional MINI Yours Interior Style Shaded Silver conveys stylish sporty flair. This is ensured by combining an illuminated cockpit bezel in the variant Shaded Silver with door bezels in Dark Silver and accentuation strips in Hazy Grey.

The biggest and most versatile member of the MINI model family generates fresh stimuli for driving pleasure and individual flair in the hallmark style of the British premium brand. Precisely refined design, attractive additions to the equipment range and innovative technology in the areas of operation and networking underpin the exceptional status of the new MINI Countryman within the premium compact segment. Its robust vehicle concept, an ample, versatile interior with five fully-fledged seats and the optional ALL4 all-wheel drive system make it an unmistakable all-round talent that inspires typical MINI enthusiasm not just in day-to-day traffic but also on long-distance trips and even when venturing into unsurfaced terrain. The progressive character of the new MINI Countryman is reflected in a model variant with plug-in hybrid drive as well as in new digital MINI Connected services. What is more, the desire for individualisation is catered to more radically than ever before with the range of additional optional extras and Original MINI Accessories.

ALL4 – a standard feature of the plug-in hybrid model

The ALL4 all-wheel drive system provides a noticeable boost in terms of traction, driving stability and agility. As an alternative to the brand’s hallmark front-wheel power transmission, this system is optionally available for four model variants of the new MINI Countryman. With its fast and precise electronic control, the system ensures need-based distribution of power between the front and rear wheels in all road surface and weather conditions.

The new MINI Cooper SE Countryman ALL4 is fitted with a hybrid-specific all-wheel drive system as standard. It is provided by the precisely controlled interaction between a 3-cylinder petrol engine transmitting its power to the front wheels with an electric synchronous motor that acts on the rear wheels. Together, the two power units produce a system output of 162 kW/220 hp. The latest eDrive technology available for BMW Group plug-in hybrid models also includes a high-voltage lithium-ion battery with a gross energy content of 9.6 kWh, giving the new MINI Cooper SE Countryman ALL4 a maximum electrically powered range of 55 to 61 kilometres.

The new MINI Cooper SE Countryman ALL4 comes with a 6-speed Steptronic transmission as standard.