BYD delivers 60-ft all-electric bus in the US 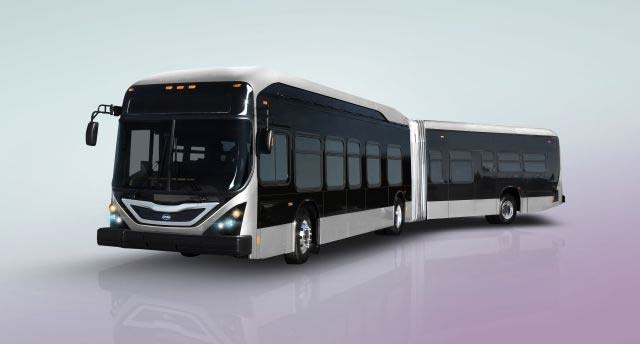 The electric bus, part of AVTA’s award-winning campaign to fully electrify its fleet by 2018, was also built with local labor in BYD’s factory in Lancaster, just miles from the AVTA office. It is the first delivery from AVTA’s order of thirteen 60’ BYD buses.

“The Antelope Valley Transit Authority is leading the North American transit market with its electrification commitment, and so it’s only fitting that they should have the first bus of its kind in North America,” said Macy Neshati, Senior Vice President of BYD Heavy Industries. “This bus runs longer and holds more passengers than any other commercially available battery-electric bus, and I know it will serve the people of the Antelope Valley well.”

Len Engel, Executive Director of the Antelope Valley Transit Authority, added, “We’ve been proud to be at the forefront of the smart business of electrification, protecting our air, saving money, and creating local jobs here in the Antelope Valley. Having the first 60-foot articulated electric transit bus on the continent is a feather in the cap of the people of Lancaster, Palmdale, and the other communities we serve.”

Utilizing BYD’s proprietary Iron-Phosphate battery, this high-capacity, high-load vehicle produces zero emissions, runs 200 miles on a single charge, delivers an impressive 3,000 Nm of torque, and integrates easily with any existing fleet. The 60-foot articulated battery-electric transit bus is designed and built in  the BYD Factory in California, and is compliant with FMVSS, ADA and “Buy America” Regulations.

The 60-foot BYD electric bus can be fully recharged in two to three hours. It will join the rest of the AVTA fleet in serving the half million residents of northern Los Angeles County.