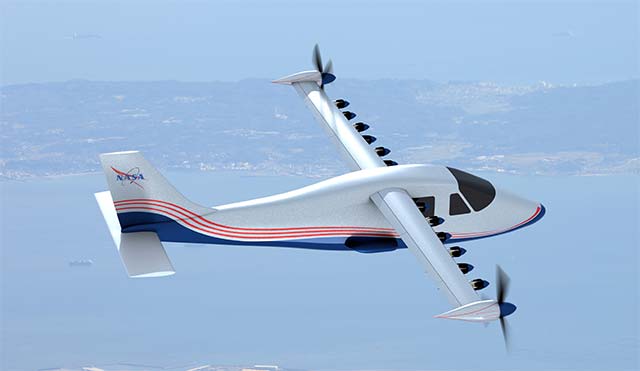 With 14 electric motors turning propellers and all of them integrated into a uniquely-designed wing, NASA will test new propulsion technology using an experimental electric airplane now designated the X-57 and nicknamed “Maxwell.”

NASA Administrator Charles Bolden highlighted the agency’s first X-plane designation in a decade during his keynote speech Friday in Washington at the American Institute of Aeronautics and Astronautics (AIAA) annual Aviation and Aeronautics Forum and Exposition, commonly called Aviation 2016.

Maxwell won’t be appearing on the horizon any time soon, though. The X-57 electric propulsion technology will be tested over four years. The space agency hopes it will demonstrate the benefits of using this technology over fuel, and pave the way for a “new era” of aviation development at NASA.

“With the return of piloted X-planes to NASA’s research capabilities – which is a key part of our 10-year-long New Aviation Horizons initiative – the general aviation-sized X-57 will take the first step in opening a new era of aviation,” Bolden said.

As many as five larger transport-scale X-planes also are planned as part of the initiative. Its goals – like the X-57 – include demonstrating advanced technologies to reduce fuel use, emissions and noise, and thus accelerate their introduction to the marketplace.

The X-57 number designation was assigned by the U.S. Air Force, which manages the history-making process, following a request from NASA. The first X-plane was the X-1, which in 1947 became the first airplane to fly faster than the speed of sound.

“Dozens of X-planes of all shapes, sizes and purposes have since followed – all of them contributing to our stature as the world’s leader in aviation and space technology,” said Jaiwon Shin, associate administrator for NASA’s Aeronautics Research Mission Directorate. “Planes like the X-57, and the others to come, will help us maintain that role.”

NASA researchers working directly with the electric airplane also chose to name the aircraft “Maxwell” to honor James Clerk Maxwell, the 19th century Scottish physicist who did groundbreaking work in electromagnetism. His importance in contributing to the understanding of physics is rivaled only by Albert Einstein and Isaac Newton part of a four-year flight demonstrator plan, NASA’s Scalable Convergent Electric Propulsion Technology Operations Research project will build the X-57 by modifying a recently procured, Italian-designed Tecnam P2006T twin-engine light aircraft.

Its original wing and two gas-fueled piston engines will be replaced with a long, skinny wing embedded with 14 electric motors – 12 on the leading edge for take offs and landings, and one larger motor on each wing tip for use while at cruise altitude.

NASA’s aeronautical innovators hope to validate the idea that distributing electric power across a number of motors integrated with an aircraft in this way will result in a five-time reduction in the energy required for a private plane to cruise at 175 mph.

Several other benefits would result as well. “Maxwell” will be powered only by batteries, eliminating carbon emissions and demonstrating how demand would shrink for lead-based aviation fuel still in use by general aviation.

Energy efficiency at cruise altitude using X-57 technology could benefit travelers by reducing flight times, fuel usage, as well as reducing overall operational costs for small aircraft by as much as 40 percent. Typically, to get the best fuel efficiency an airplane has to fly slower than it is able. Electric propulsion essentially eliminates the penalty for cruising at higher speeds.

Finally, as most drivers of hybrid electric cars know, electric motors are quieter than conventional piston engines. The X-57’s electric propulsion technology is expected to significantly decrease aircraft noise, making it less annoying to the public.