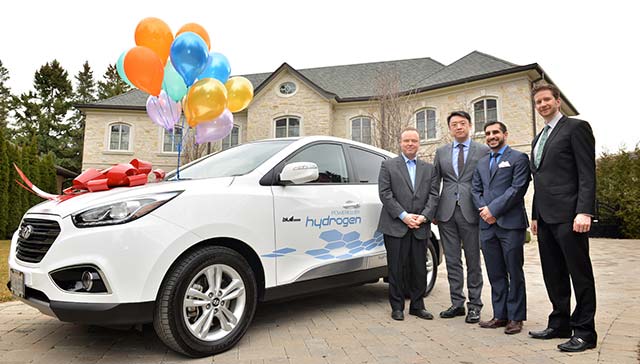 In November, 2014, Hyundai Auto Canada announced it would become the first Canadian automotive company to offer its Tucson Fuel Cell to actual, real-world customers. Since the first vehicle delivery took place in February, 2015, six Tucson Fuel Cell SUVs have been delivering thousands of zero-emissions kilometres on the roads of British Columbia. With the expansion to Ontario, the company is further demonstrating the capabilities of fuel-cell technology and calling for investment in infrastructure development.

“There is no doubt in my mind that fuel cell powertrains are ready for prime-time. We have proven that time and again,” said Don Romano, President and CEO of Hyundai Auto Canada. “The Tucson Fuel Cell is exceeding expectations with its versatility, range, ease-of-use, and features. We believe that fuel cells are the future for the automotive industry and Hyundai has shown the technology has matured. The next step facing governments at all levels is investing in a network of hydrogen fueling stations so more customers can enjoy zero-emissions driving.”

Hyundai’s advanced fuel cell technology effectively replaces the battery pack used in an electric vehicle by generating electricity from an electrochemical process that involves stored hydrogen and oxygen from the atmosphere. The process does not involve hydrogen combustion, and there are no moving parts within the fuel cell stack. The only by-product is pure water vapour, making the Tucson Fuel Cell a zero-emissions electric vehicle. Further, unlike battery electric vehicles, the Tucson Fuel Cell takes less than five minutes to refuel with hydrogen gas and can deliver an estimated 426 km of emissions-free driving.