A Japanese partnership, consisting of the Kanagawa Prefectural Government, the municipal governments of the cities of Yokohama and Kawasaki, and three private sector companies, today announced the forthcoming start of a project to implement and evaluate an end-to-end low-carbon hydrogen supply chain which will use hydrogen produced from renewable energy to power forklifts.

Announced last September, the project will be carried out at facilities along Tokyo Bay in Yokohama and Kawasaki, with support from Japan’s Ministry of the Environment.

Electricity generated at the Yokohama City Wind Power Plant (Hama Wing) will be used to electrolyze hydrogen that is compressed, stored, and then transported in a hydrogen fueling truck to four sites: a factory, a vegetable and fruit market, and two warehouses. At these locations, the hydrogen will be used in fuel cells to power forklifts operating in diverse conditions.

The hydrogen will be compressed for use in forklifts, and delivered in hydrogen fueling trucks (the first of their kind to be used in Japan). The consumption of hydrogen by the forklifts will be constantly monitored, so as to ensure optimal transportation and supply to meet user needs. Twelve forklifts will operate at the four selected locations to demonstrate their viability in a range of operating conditions.

Sufficient hydrogen to power fuel cells for two days will be stored onsite. Electricity will also be stored in an environmentally-friendly storage battery system that re-uses batteries from hybrid vehicle batteries, thus ensuring a stable hydrogen supply even when Hama Wing is not operational.


The project will involve: 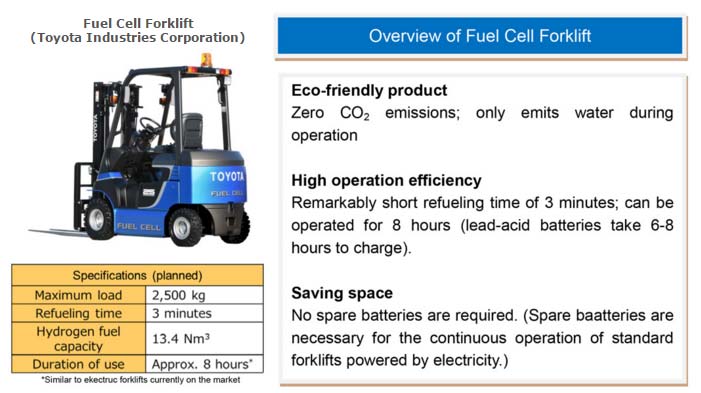