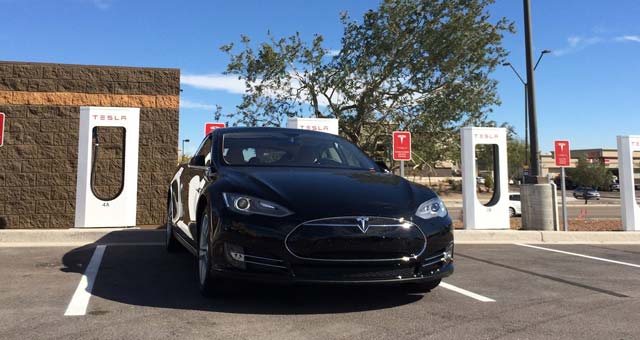 The Formula E electric racing series could soon be joined by a championship based on real-world production cars with the world’s first all-electric GT championship.

The Electric GT World Series was created by a company called Electric GT Holdings, and the first race could take place as soon as 2017.

In true GT (Gran Tourer) form, the series will use production cars that are available for consumer road use. The Electric GT World Series will see a total of twenty drivers from ten teams for its inaugural race season.

Series officials say there’s only one current vehicle that fits the bill: the Tesla Model S P85+. It offers 85 kWh of energy storage, more than the current 28kWh batteries in Formula E racers. Of course, cars on the track won’t get the same 250-mile range drivers on the open highway experience, but the extra juice will allow for longer races than the Formula E series. And those Formula E cars get a battery swap mid-race.

“We are making only small changes to the production Model S P85+ such as improved braking and aerodynamics to increase high speed grip. With 416 horsepower and 601 Nm of torque, there is no need to add anything to the motor. We will strengthen suspension, braking cooling and steering as well as reducing overall weight,” said Agustin Payá, who is also the champion of the 2015 Spanish Fia ECO Rally Champion in an all electric Mercedes Benz B electric car.

“We chose the Tesla Model S simply because it is one of the best cars ever made, and certainly one of the best 100% electric cars. We are convinced that sharing its impressive circuit racing potential will help to inspire many people about sustainable transport,” Payá told Transport Evolved.

While the series will start out with the Tesla, Payá says other makes will be welcome in the future.

During the first season, the series will debut in Europe before moving on to North American and Asia. Details are still being nailed down for dates and locations, but the events will be held at “world-class” tracks. In fact, talks are underway to take the fleet of Teslas to Barcelona-Catalunya, Donnington Park, Nürburgring and more.