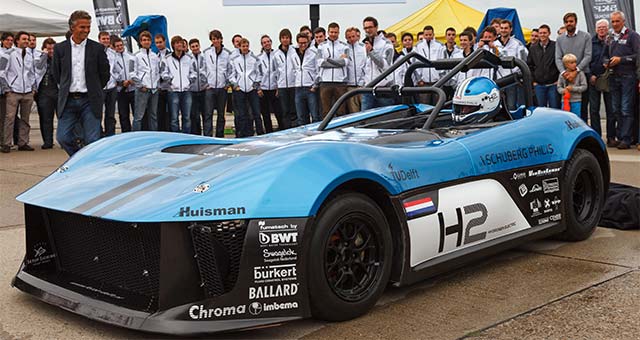 On Monday 16th of November, the Forze VI hydrogen fuel cell race car built by students from Delft University of Technology, will try to break the official lap record at the famous Circuit Park Zandvoort.

The record of 2:10:90 minutes is currently held by a Tesla Roadster. This will be the very last appearance of the Forze VI on a race track.

The Forze VI car was unveiled in 2013 by the Forze student racing team. It uses a Ballard FC Velocity MK1100 stack fuel cell system, lightweight bodywork with a diffuser for improved aerodynamics, pushrod suspension and a planetary gear system.

Two tanks carry a total of 3 kilograms (6.6 lbs) of hydrogen on board, stored at 350 bars (5,076 psi) of pressure. The stored hydrogen can keep it running for 30 minutes at full power and the tanks can be refilled in three minutes. The car boasts 258 horses on boost and an air system pushes 5000 liters of air through the powertrain to provide enough oomph.

Based on a Lotus 7 type frame, the Forze VI car has been two-and-a-half years in development, with the aim of beating the lap record for hydrogen fuel cell-powered cars on the Nurburgring Nordschleife.

With former Formula 1 driver Jan Lammers behind the wheel though, the Forze VI completed the 13-mile loop in less than 11 minutes, about a minute faster than any other hydrogen-powered race car on 7 May 2015

Currently Forze is in the early stages of building a new hydrogen-powered racing car, the Forze VII prototype racing car. This will compete against petrol-powered racing cars at the Supercar Challenge, during the Gamma Racing Day in August 2016, which will be held in the Netherlands. It is expected that the Forze VII will accelerate from 0–100 km/h (62 mph) within 4 seconds, and be able to achieve a top speed of 220 km/h (137 mph).

The video below shows the Forze VI in action on the Nurburgring.