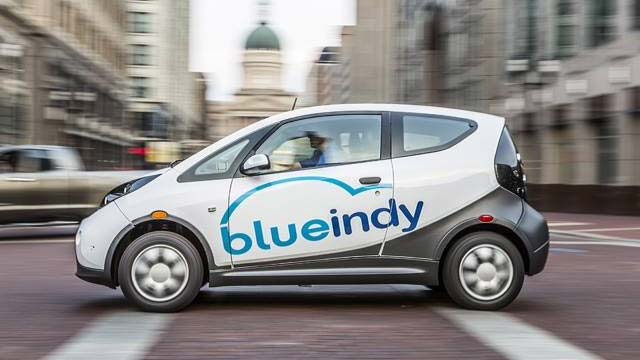 After one month in service, Indianapolis’ new all-electric car sharing service – BlueIndy – has attracted a large number of members and its recognizable electric cars are criss- crossing the city.

The electric service launched on September 2 and quickly began registering daily, weekly, monthly, and yearly memberships. The cost-effective service allows consumers to use all-electric cars for short trips around town, complementing the city’s public transit system. The vast majority of members opt for the yearly plan which is the most economical with a 20- minute ride costing just $4.

BlueIndy uses the Bluecar, an electric vehicle developed by the Bolloré Group. Bluecars have been operating since 2011 in Paris, Lyon, and Bordeaux under the names Autolib’, Bluely, and Bluecub, respectively. Indianapolis is the first American city to use the Bluecar. The city was selected to be the US showcase for this unique service, with plans to expand to other leading cities around the globe.

“Reaching the 500-member mark has special significance in the land of the Indianapolis 500,” said BlueIndy General Manager Scott Prince “and it is even more significant to see the number of trips passing the 1500 mark”. “Our goal is to deliver a convenient, affordable and reliable transit option. The enthusiasm for our new service has been fantastic and many people have already commented on how BlueIndy helps them save money and time and enhances their mobility in the city”.

BlueIndy has stations throughout the city where users can pick up and return vehicles. A number of additional stations and cars will be put in service in the coming months.