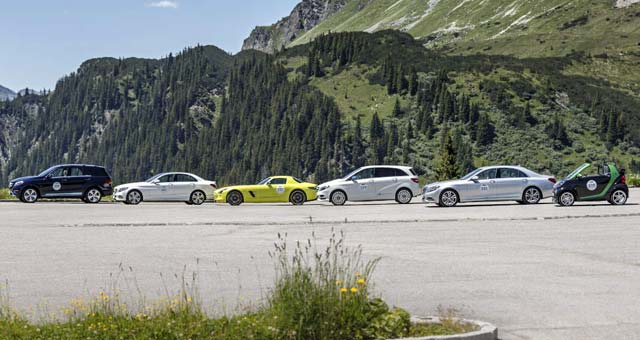 Daimler AG will be lining up at the start of this year’s Silvretta E-Car Rally with seven innovative electric vehicles. For the first time in this competition up hill and down dale, the current Mercedes-Benz plug-in triad will compete with each other.

Daimler AG is smoothing the “road to emission-free driving” with highly efficient vehicles powered by internal combustion engines, electric cars with batteries for the city and urban environment, and with plug-in hybrids for longer journeys, mixed route profiles and larger vehicles. From the smart to the Mercedes-Benz B-Class and S-Class, and right up to the Mercedes-AMG SLS sports car plus commercial vehicles: electromobility is a fixed component of the product strategy.

There is currently a very strong focus on the Mercedes-Benz plug-in hybrid initiative: by 2017 there will be ten models in the market – which means a new product launch every four months on average. Following the S 500 e presented last year and the C 350 e launched successfully in March 2015, the GLE 500 e 4MATIC due in August will be the third model in dealer showrooms. All three plug-in hybrid versions will undergo exciting challenges during the Silvretta. In addition Daimler is giving the participants in the annual electric rally an outlook on a further model in its hybrid product initiative: a compact SUV, the GLC 350 e 4MATIC.

The smart electric drive has taken part in the Silvretta E-Car Rally right from the start. And it enjoys unbroken success. It is not for nothing that this electric city runabout is Germany’s most successful electric car for the third time in succession. The market launch of the new smart fortwo and forfour is fully under way right now. Their electric variants will follow in 2016. The B-Class Electric Drive is taking up this Alpine challenge for the second time this year, and of course the Mercedes-AMG SLS Coupe Electric Drive will also take part.

The Silvretta High Alpine Road in Austria’s Montafon region is considered to be one of the most beautiful panoramic roads in the Alps. From 2 to 5 July 2015 it will be the setting for the legendary Silvretta Rally that will feature some 150 vintage cars and 30 locally emission-free electric cars. With a total distance of 366 kilometres (227.4 miles), ascents of more than 2000 metres in altitude and slopes whose gradients in some cases exceed 16 percent, the Silvretta E-Auto Rally presents a challenging terrain for the drivers in the 3-day event.

Mercedes-Benz und smart have taken part in the Silvretta E-Auto Rally from its inception, and are there for the sixth time in succession in 2015 – and once again have the largest fleet in the E-Rally with seven electric and hybrid vehicles: