Daimler With Largest EV Fleet at the Silvretta E-Auto Rally 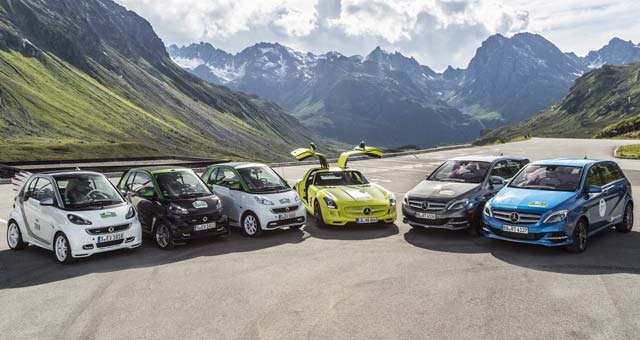 While the Silvretta E-Auto Rally celebrates its fifth anniversary in 2014, it will already be the 17th edition of the Silvretta Classic Rally.

Some 150 vintage cars and 30 locally emission-free electric cars will be led by two B-Class F-CELL cars, which will point the way over the mountain as lead No. “01″ vehicle.

With a total distance of 362 kilometres, ascents of more than 2000 metres in altitude and slopes whose gradients in some cases exceed 15 percent, the Silvretta E-Auto Rally presents a challenging terrain for the drivers. On each of the three days the teams will drive between 110 and 133 kilometres on the steep switchbacks of the Austrian Alps.

As like every year since the first Silvretta E-Auto Rally, Daimler will again have the largest fleet in 2014. At total of six locally emission-free vehicles will be at the starting line this year.

The B-Class Electric Drive will celebrate its Silvretta début – just before its official market launch in the US in mid-July. The model has been rolling off the assembly lines in Rastatt, Germany since April 2014 and proves to be a full-fledged and versatile vehicle for up to five people. With a range of 200 km, a maximum power output of 132 kW and a peak torque of 340 Nm, the course over the high Alpine road will not present any problems at all for the B-Class Electric Drive. The vehicle will be available in Europe by the end of the year.

In contrast, the B-Class F-CELL is almost an old hand on the route through the Alps. The fuel-cell vehicle impresses with a range of about 400 km, a power output of 100 kW and 290 Nm of torque. The fuel-cell technology scores points with long operating ranges and a refuelling time of only about three minutes.

The Mercedes-Benz SLS AMG Coupé Electric Drive is also a returner to the e-rally. And even though victory on the Silvretta is not won with speed: with a combined maximum power output of 552 kW, a peak torque of 1000 Nm and an sprint time from rest to 100 km/h of 3.9 seconds, the super sports car is the world’s fastest electrically powered production vehicle.