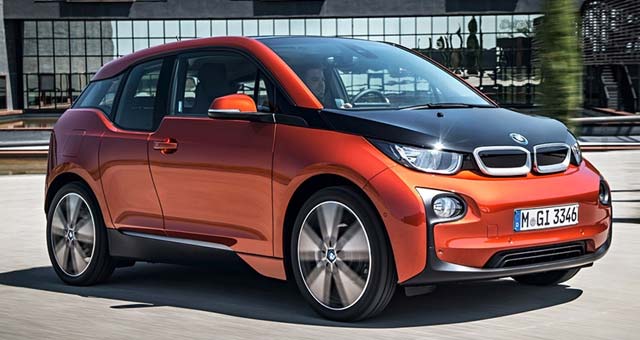 The Best Green Cars of 2015 were named by the editors from Kelley Blue Book, and this year, for the second year, the BMW i3 ranks No. 1 on the list.

Each year the KBB.com editors compile a list of the most efficient vehicles available and then pick 10 standouts featuring a variety of price ranges and powertrains. More than just a compilation of the most fuel-efficient vehicles, the list includes a wide variety of standouts, each with its own appealing mix of efficiency, practicality and price. With more environmental-focused models available every year, choosing the 10 best among the pack is proving to be a challenging task.

Among other plug-ins on the 2015 list, taking the #2 spot is the Volkswagen e-Golf, followed by the Nissan LEAF in third, Tesla Model S in sixth and the Chevrolet Volt in seventh.

“The list of ‘green’ vehicle standouts continues to blossom, and with strict Corporate Average Fuel Economy (CAFE) requirements coming down the pipeline, auto manufacturers are making stronger advancements each year in creating more environmentally friendly vehicles,” said Jack R. Nerad, executive editorial director and executive market analyst for Kelley Blue Book’s KBB.com. “Topping this list for the second year in a row is the BMW i3 – an electric car that can sprint to 60 mph in just over 7 seconds, and is made in a factory powered entirely by four wind turbines. And if 81 miles of electric range doesn’t work for you, the i3 can be had with a small gas generator that lets you go as far as there are gas stations.”