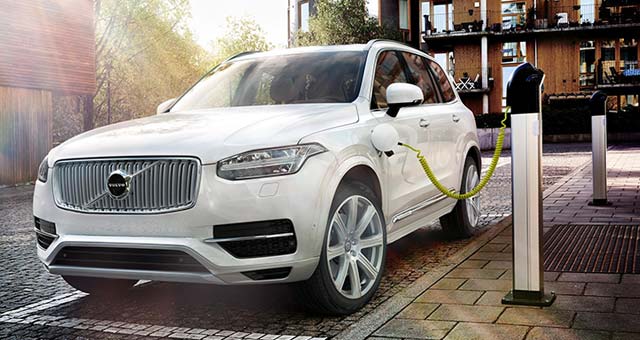 With uncompromising performance and flexibility, drivers can choose to operate the T8 in a variety of modes, including:

– Hybrid: As the default mode, it is suitable for everyday use and the XC90 will automatically alternate between drawing power from the 2.0 liter supercharged and turbocharged Drive-E engine and the electric motor to deliver the optimum overall fuel economy.

– Pure electric: This mode is used primarily in a city environment although it can power the car up to highway speeds. When the high-voltage battery is fully charged, it serves as the car’s sole energy source, powering the electric motor over the rear axle. Preliminary testing based on EPA criteria produced an estimated range of 17 miles using just electricity, which represents a high percentage of drivers’ typical daily usage.

– Power mode: This utilizes the combined performance of the combustion engine and the electric motor. On start-up, the XC90 T8 takes advantage of the electric motor’s superior response and instant torque curve, while the combustion engine gets up to speed. This combination offers better torque at lower revs, which is equivalent to that of a large displacement engine.

Because of the XC90 T8’s plug-in hybrid battery technology, consumers may be eligible for a federal tax credit up to an estimated $4,600 in addition to other local and state incentives. T8 customers should consult a tax professional to determine eligibility.

The MSRP of the Volvo XC90 T8 Twin Engine Plug-In Hybrid Momentum is $68,100, not including any tax credit incentives or $995 destination charge.

The XC90 has already received tremendous praise by customers and industry leaders. After winning this year’s prestigious Red Dot “Best of the Best” Product Design Award, preorders approached 24,000 cars globally; this is approximately half of the first year’s expected volume.