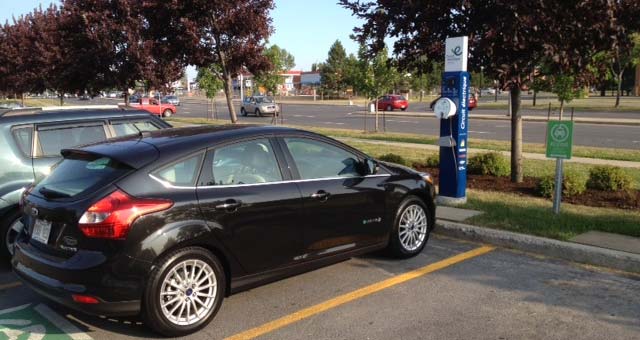 The Electric Circuit and the VERnetwork, Canada’s two largest EV charging station networks in Canada, have announced that they will soon offer total interoperability.

Drivers with an access card for either system will soon be able to use it on both. Electric Circuit members will gain access to the 150 VERnetwork stations in Québec, on top of the 400 stations in their current network.

The interoperability of the two networks will be implemented in 2015 in three stages.

1. In June, members of both networks will be able to use their cards to charge their vehicles at both Electric Circuit and VERnetwork stations.

2. In July, the Electric Circuit and VERnetwork mobile apps will be able to display the stations in both networks and provide all the features currently available in either of the applications (log-in, start-up, real-time tracking of charging, and more).

3. In the fall, all the stations and their status will be displayed on both the Electric Circuit and the VERnetwork Web sites.

Each network will maintain its rates for its stations.

The Electric Circuit intends to continue its expansion in the months to come, chiefly by stepping up the opening of fast-charge stations. Earlier this year, Nissan Canada announced that it would support the expansion of the public charging system by helping set up 25 sites with 400-V DC stations. The Nissan partnership agreement is part of a new stage in the development of the Electric Circuit, which aims to have 50 fast-charge stations on main highways and in big cities in Québec by the end of 2016.

The Electric Circuit will also continue to roll out the network of 240-V stations and plans to have 725 in operation by the end of 2016. On January 16, Les Rôtisseries St-Hubert announced that there would be public charging stations at all its restaurants by the end of 2015. That means more than 50 new stations in addition to the 28 already in operation at St-Hubert restaurants.

“This is excellent news for EV drivers. The two biggest charging networks in Canada will be available to anyone having an access card for either one of them: users will have access to almost 1,000 charging stations. The VERnetwork provides charging in all types of parking areas, whether at home, at work or in public places, from British Columbia to the Maritimes! It was crucial to us and our customers to enter into an agreement with the most extensive public charging system in Québec, the Electric Circuit,” said Louis Tremblay, president and chief executive officer of ADDÉnergie.

“We are extremely pleased to offer our members more charging opportunities. With the addition of 150 VERnetwork public charging stations, our 4,000 members will now have access to 550 charging stations across Québec, in addition to those in neighboring provinces,” said France Lampron, Hydro-Québec’s Director – Transportation Electrification, on behalf of the Electric Circuit partners. “Since its launch in March 2012, the growing popularity of the public charging network with the community of EV drivers has encouraged us to continue to expand the network to meet their needs. In offering all members of both networks access to both the VERnetwork and the Electric Circuit, we are taking another step in the right direction.”