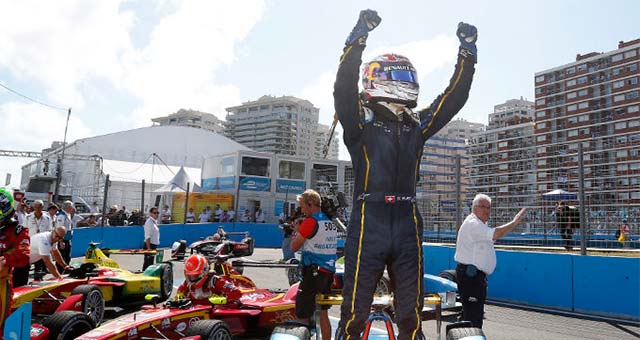 Sebastien Buemi clinched his first Formula E victory with a great drive in Punta del Este, holding off a charging Jean-Eric Vergne for a well-deserved win.

Vergne started from pole, but lost out to the fast-starting Nelson Piquet Jr. But as the China Racing driver sought to press home his early advantage he pushed a bit too hard and brushed the wall.

The damage was minor, but it meant that the handling of his car started to deteriorate. Vergne took the lead with a well-judged lunge into the Turn 8 hairpin and instantly pulled clear as Piquet battled with e.dams-Renault team-mates Buemi and Nico Prost, as well as an ill-handling car.

When Venturi’s Stephane Sarrazin hit a kerb hard and broke his suspension and spun, the Qualcomm Safety Car came out. Its mid-race timing was perfect and all the drivers darted into the pits. This was especially well-timed for Mahindra’s Bruno Senna, who’d tagged the wall avoiding the spinning Sarrazin. He three-wheeled back to the pits, swapped cars and continued.

The caution period came a lap after Vergne had pitted and he lost the lead to Buemi, who had finally found a way by Piquet, during the stops.

For the rest of the race Buemi had Vergne in hot pursuit. But with four laps to go, the BMW i8 was deployed again, this time after Matthew Brabham slammed his Andretti entry into the wall of the exit of the fast T15 chicane.

At the restart Vergne deployed his FanBoost, and although he closed right in, it wasn’t quite enough to make a pass. It seemed set for an epic final lap battle, only for Vergne to be denied by broken suspension. It was a cruel end to a great debut.

With Piquet too far back to attack, Buemi could relax and score an impressive win.

After being denied in Malaysia, Piquet was naturally thrilled to score his first podium finish.

For the third time in three races Lucas di Grassi scored a podium finish, extending his championship lead to 18 points in the process.

Virgin Racing’s Sam Bird remains in second, level on points with Buemi, but it was a race to forget for the Putrajaya winner. He crashed out early on at T2, causing the first of the three Qualcomm safety car periods.

Jarno Trulli scored his first Formula E points after a feisty drive to fourth. The Italian enjoyed race-long battles with the likes of Brabham and Sarrazin.

The Venturi driver actually came out in the lead during the pitstop, but was penalised for exceeding the minimum time. He was punished again for using too much power, but on the last lap his used his FanBoost to overtake Antonio Garcia and score a point.

Daniel Abt picked up two bonus points for the fastest lap, but it was not a happy race for the German. His Audi Sport Abt car kept switching itself off, which meant he finally finished 15th, three laps down.