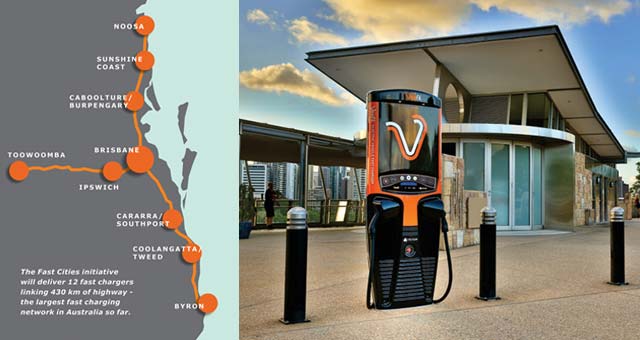 The company is also calling on Australian corporates and organisations to support the project and kick-start greater awareness of the benefits of EV ownership for individuals, businesses and Queensland cities.

Located within the SE Queensland region, the proposed 430 km (267 miles) network will create an electric super highway, showcasing intra-city and intercity travel for EVs in Brisbane and the Gold Coast area.

The Fast Cities Network will connect Brisbane to Noosa, Toowoomba and Byron Bay, making charging quick, easy and convenient for drivers of pure electric and hybrid vehicles.  Twelve Veefil fast charge points will be strategically located along major transport corridors, meeting around 95 per cent of the travel needs of people living in South East Queensland.

“Australia, ahead of the world in so many areas, is lagging behind as a nation in the uptake of electric vehicles, which have been shown to make an enormous contribution to creating cleaner, healthier cities, explains Tritium’s Commercial Director, Paul Sernia.

Sernia estimates the cost of implementing the Fast Cities Network will be around Aus$450,000, and is inviting businesses and organizations to get behind the initiative.

“We are launching this initiative as a global demonstration of how to operate and run a fast-charging EV network beyond just one population centre. EVs are coming and it’s something councils around the world need to deal with.  We want them to be looking to Queensland to see how a great intercity charging network can be operated.  Our aim is to challenge the way e-mobility is implemented.

In countries where there is significant growth in EVs, the availability of a fast-charging infrastructure has been critical, giving drivers the confidence and convenience to embrace greener transport options. Veefil fast chargers, which will be sited along the Fast Cities Network, will be able to add 50km of driving distance in just 10 minutes, enabling EV drivers to easily travel the region and address perceptions of ‘range anxiety’.  The network will make EV ownership an extremely attractive choice in the region.”

– The world’s only aluminium structure and liquid-cooled fast charger, functioning in -35 degrees C to +55 degrees C.  This makes it more robust than other chargers over a wide range of environmental conditions, including temperature, humidity and corrosive conditions – increasing reliability and reducing maintenance.

– Has the smallest footprint and lowest weight of all DC EV fast chargers, increasing location options and reducing shipping and installation costs.  It can fit neatly at the end of a standard parking bay within existing infrastructure.

– Weighs only 165 kg – at least half the weight of most other EV fast chargers – and is a polycarbonate and aluminium construction, ensuring long-term stability of the entire enclosure, which leads to lower maintenance costs.