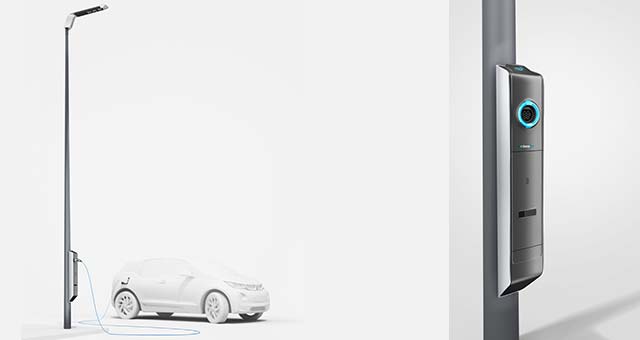 At EUROCITIES 2014 in Munich, where more than 500 delegates from European cities have come together to discuss innovative infrastructure projects, the BMW Group has unveiled a high-efficiency street lighting system that doubles as a charging station for electric cars.

This innovative system is the outcome of a pilot project dubbed Light and Charge.

Light and Charge is a combined state-of-the-art LED street light and charging station for electric cars. The charging station is integrated in the BMW i ChargeNow network, which means its users also enjoy convenient cashless payment. This project is an example of how the BMW Group is using its technological expertise not only to develop electric cars but also as part of a much wider commitment to electric mobility.

The German car manufacturer said it will run a pilot project in Munich next year that uses existing local authority lighting networks to power their vehicles.

“Light and Charge is a simple and innovative solution which aims to seamlessly integrate a smoothly functioning charging station network into the urban landscape,” said Peter Schwarzenbauer, Member of the Board of Management of BMW AG, speaking at the official inauguration of the first two integrated street light / charging station systems. “The BMW i ChargeNow card already offers access to the world’s largest network of charging stations, and now it gives us great pleasure, in cooperation with our partners, to further expand this network with the help of the Light and Charge project. After all, a seamless charging infrastructure is essential if we want to see more electric cars on the road in our cities in the future.”

With its modular LED design, the Light and Charge street light is much more energy-efficient than conventional street lighting and provides more effective illumination. It can be installed anywhere and its modular design can to be tailored to different locations. Up to four LED modules can be used to provide night-time lighting on main roads, while one or two modules are sufficient to provide agreeable lighting on side streets and in residential areas. As is already the case with car headlights, LED technology allows more targeted light distribution with less unnecessary and ecologically undesirable “scatter”.

With the development of the Light and Charge system, the BMW Group has signalled its commitment to the deployment of a seamless charging station infrastructure for electric cars. The solution it is developing in cooperation with the city of Munich can be grafted straight onto the existing local authority street lighting infrastructure, substantially increasing the number of public charging stations at a stroke. The pilot project is due for launch in Munich in spring 2015. EV charging stations can be set up at any location where suitable parking is available, simply by replacing conventional street lights with Light and Charge systems.

The EV charging cable connects to a standard connector on the Light and Charge street light. The integrated control panel allows drivers to start charging with a simple press of a button. The electricity used is billed via the BMW i ChargeNow network – a system already familiar to users of the large numbers of public charging stations already participating in this network.

Worldwide, the ChargeNow network already offers BMW i customers approximately 18,000 charging stations. In Europe, the concept of provider-independent charging can be further optimised with the help of the Hubject “e-roaming” platform. The Light and Charge systems presented and in use in Munich have been designed from the start for integration into the ChargeNow network and the Hubject platform. That will allow these additional charging stations to be used by as many drivers as possible, regardless of car model and electricity provider.[wzslider height=”400″ lightbox=”true”]