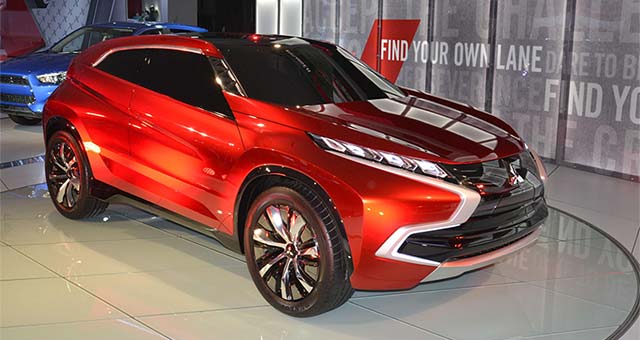 “We brought the Concept XR-PHEV to LA so that we could talk about our new design direction and how future products will be taking clues from its dynamic lines,” said MMNA Executive Vice President, Don Swearingen. “We also brought it to LA to reinforce the message that Mitsubishi is here to stay in the United States.  As we regrow the brand we will introduce new models while updating existing ones, creating a new look and a new value proposition for the brand.”

In this new configuration, Mitsubishi Motors’ PHEV powertrain is made of a 1.1-litre in-line 3-cylinder MIVEC turbocharged petrol engine; a single (instead of two for Outlander PHEV) lightweight, compact and high-efficiency motor with a high-boost converter at the front; and a high-capacity battery under the floor. The boost converter increases motor and generator output and efficiency.

Opting for a front-wheel drive PHEV system with no motor at the rear reduces weight as well as friction losses and returns improvements in fuel and electricity economy, much appreciated by customers of more accessible smaller C-Segment vehicles such as the 4.37 m long Concept XR-PHEV.

Along the same lines, 100% EV driving is possible through use of Battery Charge Mode or Battery Save Mode.

Concept XR-PHEV is also fitted with 100V AC on board sockets capable of giving an external supply of up to 1500W of power. The system can supply enough electricity to power domestic appliances for a full day from the drive battery alone and up to a maximum of 10 days when the engine is used to fill the battery.[wzslider height=”400″ lightbox=”true”]