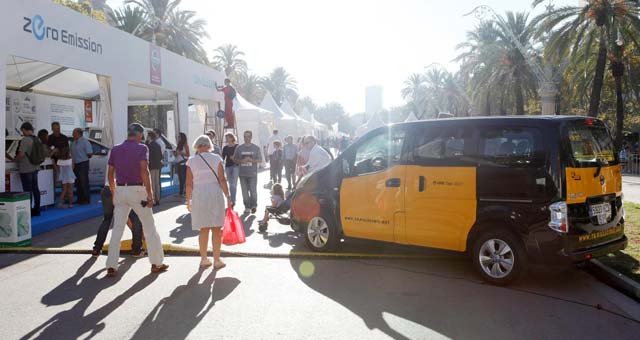 The introduction the Nissan electric vehicles  – the Nissan LEAF to Madrid’s taxi fleet, and the e-NV200 taxi for Barcelona – brings the option of quiet, zero-emission travel to these bustling city centres.

The Barcelona deliveries served as an important step in the execution of an agreement between Nissan, the City of Barcelona, and the Barcelona Metropolitan area which brings the Barcelona-built e-NV200 to the streets of the city where the revolutionary electric van is produced.

These initiatives reinforce Nissan’s continued commitment to electric vehicles as the market continues to develop. September was also the month in which 2014 sales of the pioneering family hatchback passed the 2013 total, with three months still to go.

Madrid
Madrid has now its first 100% electric Nissan LEAF taxi, the best-selling electric vehicle in the world with more than 142,000 units sold globally. The event was held at Puerta del Sol in Madrid, where the “Zero KM” the measuring starting point of all the Spanish roads is located.

Antonio Berzal Prieto, the first 100% electric taxi driver in Madrid to choose electric technology for his business, declared “When I heard that the Nissan LEAF had been approved as a taxi for the city, I quickly looked into all the options it offered me. In addition to the environmental benefits, the costs of ownership are highly competitive and the car’s performance is excellent.”

Barcelona
The delivery of the first three Nissan e-NV200 Taxis took placed during the Expo-electric Formula-e event, one of the most important meetings on sustainable mobility in Europe.

The development and introduction of these first three e-NV200 Taxis units is part of the Memorandum of Understanding signed last year between Nissan, the Barcelona City Council and the Barcelona Metropolitan Area, which set out a number of different and significant measures to promote and to sustain the rollout of sustainable mobility in Catalonia Region. The e-NV200 began production in Barcelona in May, with the Catalan city building the electric commercial vehicle for the global market.[wzslider height=”400″ lightbox=”true”]