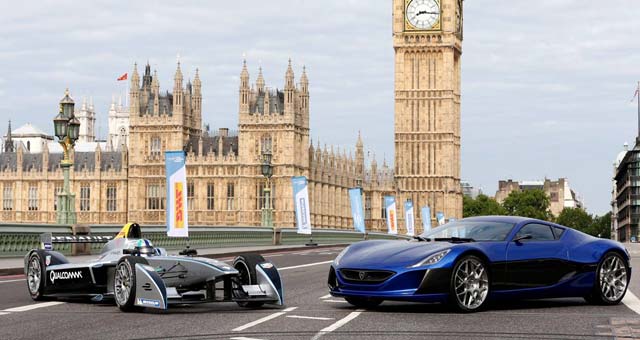 Pioneering electric car company Rimac Automobili has announced that it is to supply the new all-electric FIA Formula E Championship with one of its exclusive Concept_One supercars.

The fully-electric one-of-a-kind car, which can accelerate from 0-60mph in the same time as a Formula E single-seater, will be supplied for use by the championship’s Race Director during all race events, allowing them to conduct track inspections and other duties whilst producing zero emissions.

The Rimac Concept_One will also be used for passenger laps during Formula E events.

Based in Croatia, near Zagreb, Rimac Automobili is a family of enthusiasts, engineers and designers that set up in 2009 to find new ways of making cars faster, and to prove to the world that electric cars can be fun – complementing the ethos of the Formula E championship.

The Concept_One features an advanced powertrain consisting of four individual drive systems, each consisting of a very powerful proprietary permanent magnet synchronous motor and gearbox unit. Each of the four systems drives its own wheel independently, introducing new levels of handling and adjustability through the Rimac-All-Wheel-Torque-Vectoring System.

With a power output of 1088hp and torque levels of 1600Nm from 0 to 6500rpm, each wheel can also independently accelerate or decelerate in a fraction of a second helping to give superb handling and driving experience. Of course, like the Formula E cars, being fully-electric the Concept_One also produces no emissions.

Mate Rimac, CEO of Rimac Automobili, said: “Racing has always been the driver of innovation. It is the reason for our very existence as Rimac Automobili was born as the result of my passion for racing and electronics. We believe that the Formula E series will be an incubator for thousands of innovations and technologies that will contribute to the adaptation of electric drivetrain technology in many applications. It only makes sense that a car that is truly embracing the possibilities of the technology takes part in the series – the Concept_One shows already today what tomorrow’s technology can do. Our strong partnership with the Formula E series is a unique opportunity to push the limits even further.”

Alejandro Agag, CEO of Formula E, added: “We’re very excited to be working with such an innovative company like Rimac Automobili. The Concept_One is a fantastic piece of modern technology and we’re looking forward to showcasing this to Formula E fans at race events to show them the true potential of electric cars and the possibilities for the future.”