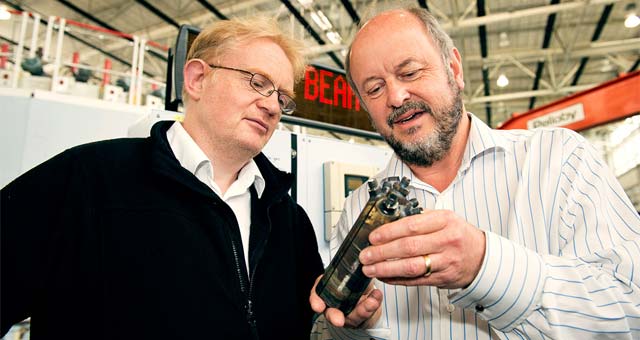 UK researchers announced what they believe to be a game changer in the use of hydrogen as a “green” fuel.

A new discovery by scientists at the UK’s Science and Technology Facilities Council (STFC), offers a viable solution to the challenges of storage and cost by using ammonia as a clean and secure hydrogen-containing energy source to produce hydrogen on-demand in situ.

Hydrogen is considered by many to be the best alternative fuel for automotive purposes but there are complications with its safe and efficient storage and very significant concerns surrounding the costs of a hydrogen infrastructure for transportation. This new discovery may well have found the answers to both these challenges.

When the components of ammonia are separated (a technique known as cracking) they form one part nitrogen and three parts hydrogen. Many catalysts can effectively crack ammonia to release the hydrogen, but the best ones are very expensive precious metals. This new method is different and involves two simultaneous chemical processes rather than using a catalyst, and can achieve the same result at a fraction of the cost.

Ammonia can be stored on-board in vehicles at low pressures in conformable plastic tanks. Meanwhile on the forecourts, the infrastructure technology for ammonia is as straightforward as that for liquid petroleum gas (LPG). 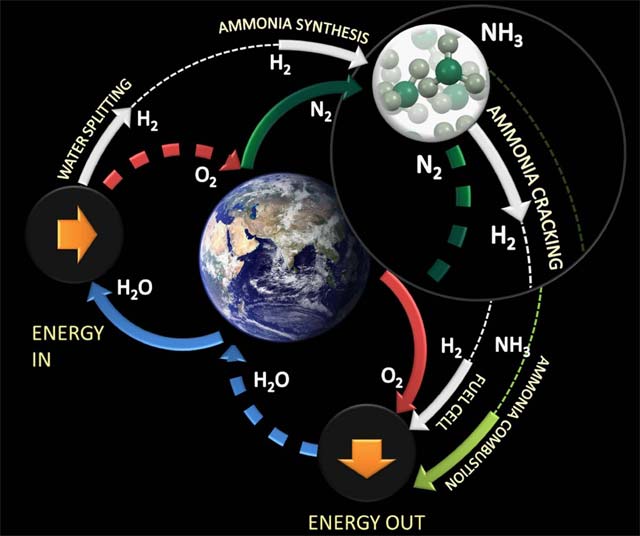 Professor Bill David, who led the STFC research team at the ISIS Neutron Source, said “Our approach is as effective as the best current catalysts but the active material, sodium amide, costs pennies to produce. We can produce hydrogen from ammonia ‘on demand’ effectively and affordably. Few people think of ammonia as a fuel but we believe that it is the natural alternative to fossil fuels. For cars, we don’t even need to go to the complications of a fuel-cell vehicle. A small amount of hydrogen mixed with ammonia is sufficient to provide combustion in a conventional car engine. While our process is not yet optimised, we estimate that an ammonia decomposition reactor no bigger than a 2-litre bottle will provide enough hydrogen to run a mid-range family car.”

“We’ve even thought about how we can make ammonia as safe as possible and stop the release of NOx gases,” added Professor David.“This fundamental science therefore has immense potential to change the use of hydrogen as a fuel.”

Dr. Martin Jones, also from STFC and who with Professor David invented this new process, said “Having developed this new approach to decompose ammonia, we are now in the process of creating a first low-power static demonstrator system. Our technology will no doubt evolve, but our research invites scientists and technologists to address a different set of questions.”

David Willetts, the UK Minister for Universities and Science, said “This is exactly the sort of innovation we need UK researchers and engineers to develop to secure our role as a global leader in this field, putting Britain at the forefront of solving modern day transportation problems. This breakthrough could also hugely contribute to our efforts to reduce our greenhouse gases by 80% by 2050.”

Ammonia is already one of the most transported bulk chemicals worldwide. It is ammonia that is the feedstock for the fertilisers that enable the production of almost half the world’s food. Increasing ammonia production is technologically straightforward and there is no obvious reason why this existing infrastructure cannot be extended so that ammonia not only feeds but powers the planet.

2015 will be a significant year in the development of the car. While there is currently substantial interest and excitement in all-electric vehicles such as the Nissan Leaf and the Tesla Model S, next year car manufacturers will begin to roll out a new generation of fuel-cell electric vehicles. Batteries play a significant role in these cars but the vehicle range, which will be equivalent to conventional cars, will be provided by a fuel cell powered by hydrogen.

While all-battery cars have issues with driving range, hydrogen provision is a major headache both on-board for the fuel cells and on the forecourt for refuelling. The hydrogen in these 2015 cars will be stored on-board in very high pressure tanks, and at even higher pressures at the forecourts. The safety issues of storing hydrogen on-board at these pressures are substantial while the cost issues of installing a new high-pressure infrastructure at the forecourts across the nation are currently massively prohibitive.