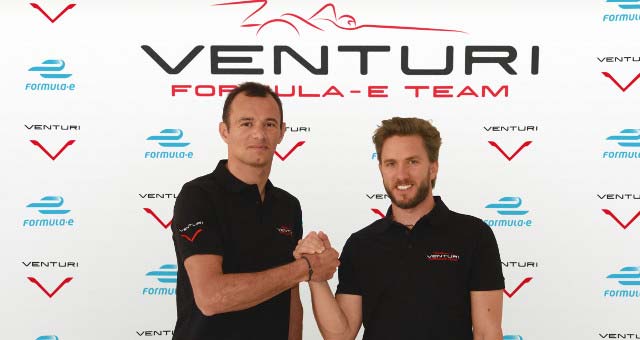 The duo will represent Venturi when they line-up on the grid at the start of the world’s first fully-electric racing series in Beijing on September 13 2014. Neither Heidfeld nor Sarrazin are strangers to the international racing scene, having both competed in various forms of motorsport including Formula 1, WRC and Le Mans.

To date, 10 of the 20 drivers have been conformed with Daniel Abt and Lucas di Grassi driving for Audi Sport Abt, Sam Bird and Jaime Alguersuari at Virgin Racing, Bruno Senna and Karun Chandhok at Mahindra Racing, Franck Montagny at Andretti Autosport and Jarno Trulli at new team TrulliGP.

Venturi Automobiles, a leader in high performance electric sports cars, will offer to supply technology to the teams participating in the championship in season two, including Venturi Formula E Team. Venturi Automobiles is the current holder of the FIA world land speed record for an electric vehicle with 495kph (307mph in 2010) and will attempt a new world speed record this summer.

German driver Nick Heidfeld, 37, said: “It’s new, and new means exciting. It feels really special to be part of a starting project that is going to bring a lot to the future of racing and the automobile. I remember when I was young and starting in karting, sustainable development was not in people’s mind. When you’ve been involved in driving and motorsport at a high level for such a long time, you step into a car and automatically start to compare to what you’ve experienced before. I will try to bring some ideas of what I’ve seen and experienced to help the team perform at the highest level. The team will work as one to find solutions: that’s what I like, to move forward. Working on a car is really interesting and very satisfying when you achieve winning results.”

Frenchman Stéphane Sarrazin, 38, said: “Being a part of this new championship is amazing. I am excited and motivated to sit in a totally new car with pioneering technology and to undertake a new discipline. In addition, street circuits promise a lot of close competition and fights between good drivers. You have to perform to make people dream. It’s a great way to raise awareness of electric vehicles. I have three years’ of experience in hybrid vehicle competition, which introduces the concept of being efficient in saving energy and the FIA Formula E Championship takes this to another level. This is something very important and I want to build on my experience. I am proud to race for Venturi, a renowned pioneer in electric vehicles. This is the future.”

Jun 27, 2014Blagojce Krivevski
Hydrogen Breakthrough Could Be A Game-Changer For The Future Of Car FuelsNREL and GM Announce R&D Partnership to Reduce Cost of Automotive Fuel Cells