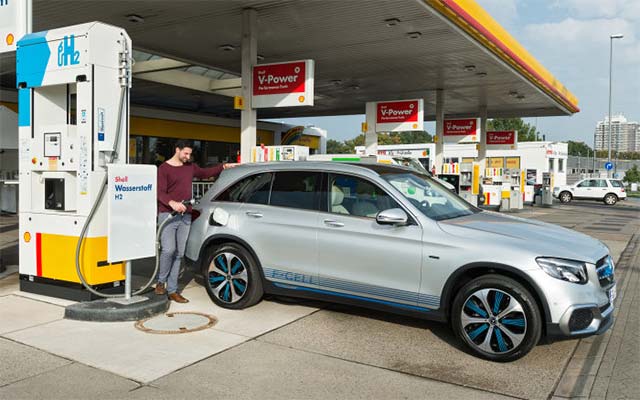 Daimler, Shell and Linde inaugurated the city of Bremen’s first hydrogen filling station, Drivers of emission-free fuel-cell cars now have a refuelling option on the important route between Hamburg and North Rhine-Westphalia.

The new site at Osterholzer Heerstraße 222 is located directly on the Sebaldsbrück motorway exit and the Bremen interchange, and is also near the Mercedes-Benz plant in Bremen, one of Daimler AG’s largest car plants in the world. This is where the new generation of Mercedes-Benz fuel-cell vehicles is to be produced; in September, Daimler had presented pre-production vehicles to the public at the International Motor Show (IAA) in Frankfurt. The Mercedes-Benz GLC F-CELL is the first vehicle to combine innovative fuel-cell and battery technology in a purely electric plug-in hybrid.

Daimler is the developer of the hydrogen station, which is integrated into a Shell service station. The innovative H2 filling station technology comes from the technology company Linde. The three companies are partners in the joint venture H2 Mobility, which is building a hydrogen infrastructure in Germany. The hydrogen station in Bremen is state-of-the-art and offer drivers an intuitive fuelling experience similar to that of conventional vehicles. The refuelling process takes three to five minutes to complete.

Hydrogen plays an important role in the debate on how Germany can achieve its climate goals. It is one of the options for extending the fuel supply in the transport sector in a climate-friendly manner; climate-damaging CO2emissions can be significantly reduced by using hydrogen produced with renewable energy. A hydrogen-powered fuel cell vehicle does not emit any local pollutants or carbon dioxide (CO2) emissions, and has an operating range of up to 700 kilometres (435 miles).

Turning hydrogen mobility into a success story will require an attractive range of fuel-cell vehicles and, simultaneously, the necessary refuelling infrastructure. Germany’s Federal Ministry of Transport and Digital Infrastructure is therefore supporting the construction of the country’s first 50 hydrogen filling stations via its National Innovation Programme for Hydrogen and Fuel Cell Technology (NIP), and has invested around 900,000 euros (1.06 USD) in the construction of the facility in Bremen.

By creating this important hub, the partner companies have taken another step towards a nationwide H2 supply network.