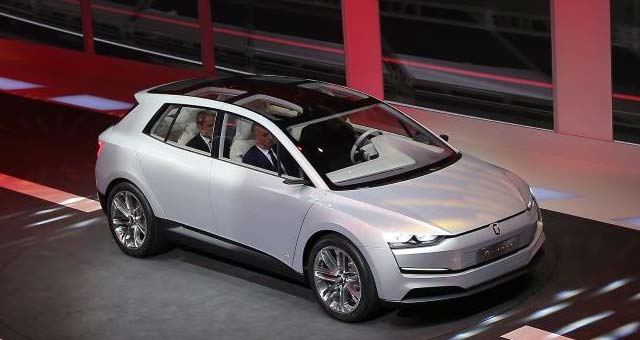 Described as a sporty and versatile MPV, the electric Clipper is based on Volkswagen’s MQB platform.

The Clipper’s most interesting features by far is its unique door design – part Lamborghini, part Tesla Model X. All six occupants can get in the car at the same time.

With the absence of a conventional engine and the batteries all being mounted in the floor, almost all of the car’s footprint is given over to a spacious interior. There are three rows of two seats, the rearmost two can be folded flat for a 900-litre load space.

Speaking of the interior, it is decidedly high-tech as it boasts an assortment of displays including a “floating” digital instrument cluster that breaks up information into two different screens. There’s also an 11-inch touchscreen display which is mounted on an electronically adjustable center console. The model also has two-tone Alcantara upholstery and four iPad Minis that are integrated into the headrests of the first and second row seats.[wzslider height=”400″ lightbox=”true”]