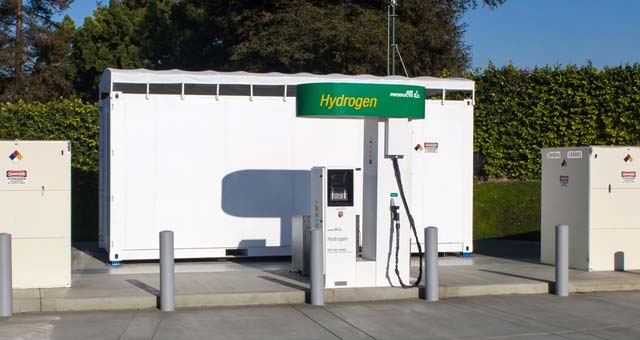 Preparing for the 2015 introduction of the next Honda fuel cell-electric vehicle (FCEV), Honda R&D Americas has installed a state-of-the-art hydrogen refueling station on its Torrance, California campus.

This advanced station will serve as a platform for demonstrating and validating the enhanced hydrogen fueling protocol developed by Honda, named the MC Fill. With the aim of standardizing this new protocol, Honda will make the new research station available to other automakers to further validate the MC Fill protocol’s performance and functionality.

The MC Fill fast-fill protocol is designed for fuel systems that store hydrogen at a pressure of 700 bar (70MPa or 10,000 psi). This new fueling protocol reduces 700-bar fueling times by up to 45 percent versus comparable fueling protocols, and can complete most fills in less than three minutes under normal temperature conditions. The MC Fill more precisely monitors the dispenser outlet temperature and uses this information to calculate the shortest fueling time possible. This dynamic, fast-fill control not only provides FCEV customers with shorter fueling times, but it also allows the dispenser to continuously adjust to current temperature and other conditions which normally affect the refueling time.

Derived from two key values in a heat transfer equation—”M” for mass and “C” for specific heat—the MC Fill name refers to the heat capacity of the hydrogen storage system and represents the capability of the system to absorb the heat that is generated during fueling. The MC Fill protocol utilizes this value, as well as the dispenser outlet gas temperature and pressure, in its fill control logic.

Honda has led the industry for nearly two decades in the development and deployment of fuel cell technology through extensive real world testing, including the first government fleet deployment and retail customer lease programs in the United States. Honda has also made significant technological advancements in fuel cell operation in both hot and sub-freezing temperatures and safety regulations, since the introduction of its first generation fuel cell vehicle, the FCX, in 2002. Honda launched its current fuel cell-electric vehicle, the FCX Clarity, in July 2008 as a real technological breakthrough in the areas of design, sedan packaging, assembly line manufacturing, and fuel cell stack size and efficiency, winning “World Green Car of the Year.”

In November 2013, the new Honda FCEV Concept debuted at the Los Angeles International Auto Show, pointing the way to an all-new Honda fuel cell car launching in the U.S. and Japan in 2015 and later in Europe. Honda’s next-generation fuel cell-electric vehicle will feature a fuel cell powertrain packaged completely in the engine room of the vehicle, allowing for efficiencies in cabin space as well as flexibility in the potential application of FC technology to multiple vehicle types in the future. The next-generation Honda FCEV is anticipated to have a driving range of more than 300 miles.