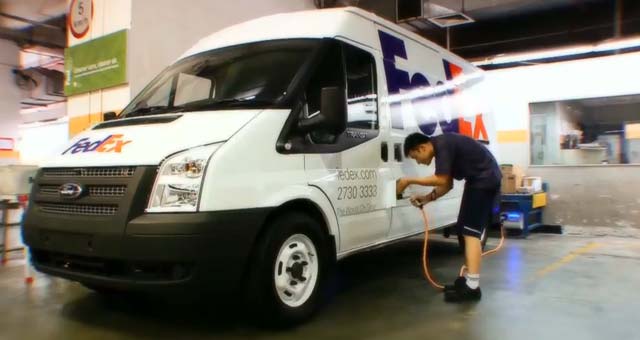 FedEx Express today announced the expansion of its alternative-energy vehicle fleet with the introduction of 10 new electric commercial vehicles for use in Hong Kong.

This is the first fleet of zero-emission all-electric vehicles for FedEx in Asia Pacific.

The electric vehicles will be deployed in Hong Kong in March 2013, joining the more than 650 alternative-energy delivery vehicles already in the FedEx global vehicle fleet.

These electric and other alternative energy have made a significant contribution towards an announcement by FedEx earlier this month that it has surpassed its goal to increase the fuel efficiency of its vehicle fleet 20 percent by 2020. FedEx has also increased its original goal by 50 percent, now setting a target for 30 percent improvement in fuel efficiency for its global vehicle fleet by the original 2020 target date.

FedEx is looking to achieve its environmental goals through EarthSmart – the FedEx roadmap for operating in an increasingly sustainable way and engaging team members, customers, business partners, and a network of influencers to help reduce the environmental impact of its daily business operations.

FedEx currently has more than 650 alternative fuel vehicles in its global vehicle fleet, and will have approximately 200 all-electric vehicles by the end of its fiscal year 2013. In Asia Pacific, FedEx has two hybrid vehicles in Hong Kong already in operation since 2010 and teamed with General Motors in Japan in the test operations of a fuel-cell delivery vehicle for one year. FedEx announced in September 2012 that it had been working with Nissan to co-test the e-NV200 electric van in Japan and the U.K.