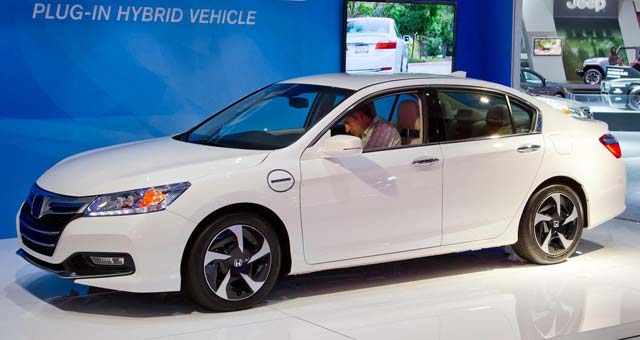 The 2014 Honda Accord Plug-In Hybrid went on-sale at select New York and California Honda dealers on January 15 with an MSRP of $39,780 and a monthly lease price of $429.

Combining hybrid efficiency with a powerful dose of instantaneous electric-motor torque, the 2014 Honda Accord Plug-In is rated by the EPA with a maximum EV Mode driving range of 13 miles and a gasoline fuel-economy rating of 47/46/46 mpg (city/hwy/combined).

The 2014 Accord Plug-In earned the highest EPA MPGe rating (115 MPGe) in its class, topping all plug-in-class competitors.

In addition to being Honda’s first plug-in hybrid electric vehicle, the Accord Plug-In is the first production car in the U.S. to meet the new, more stringent LEV3/SULEV20 emissions standard, and will also qualify for single-occupant carpool-lane access in California.

To maximize driving efficiency, the new two-motor hybrid system allows the Accord Plug-In powertrain to transition seamlessly between all-electric EV Drive, gasoline-electric Hybrid Drive; and direct Engine Drive. Beyond its function as a full-electric vehicle, owners of the Accord Plug-In will be able to choose two additional driving modes to manage battery capacity and tailor the capabilities of the vehicle to their commute.

In its default start-up mode, the Accord Plug-In acts as a pure electric vehicle and will remain in full-electric mode until the battery state of charge necessitates the automatic switch to gas/electric hybrid operation. At higher speeds and engine loads, such as during aggressive acceleration, the gasoline engine kicks in to provide additional power. There is also a button on the center console that allows the driver to manually select EV mode – for example, if they want to utilize EV mode in their neighborhood, or in city traffic on stop-and-go highway driving when regenerative braking potential is increased. In the driver-selectable “HV” mode, the plug-in Accord acts as a conventional hybrid, blending electric motor gasoline engine power to maximize fuel efficiency while maintaining the battery charge level.

The plug-in Accord can be fully charged from a low-charge indication point in less than three hours using the supplied 120-volt charger when plugged into a standard 120-volt household electrical outlet (use of a dedicated GFCI outlet is recommended), and in less than one hour using a 240-volt “Level-2” charger.

The free HondaLink™ EV smartphone application will allow owners to remotely monitor the charging state of the Accord Plug-In.

Based on the Touring trim level of standard Accord Sedan but featuring unique styling cues, the 2014 Honda Accord Plug-In will be available in three exterior colors, including two standard Accord shades (White Orchid Pearl and Crystal Black Pearl) plus a model-exclusive Burnished Silver Metallic.