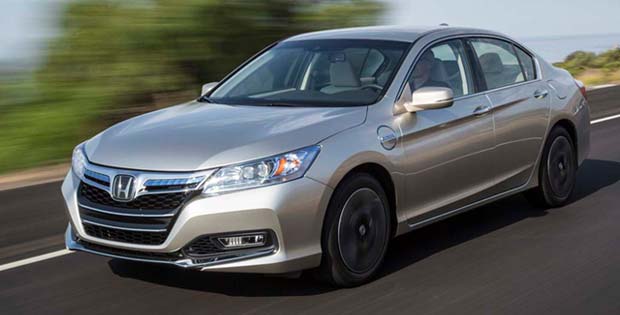 Honda released details about the 2014 Accord Plug-in Hybrid that will arrive in dealerships across the country early next year.

To maximize driving efficiency, the uniquely designed two-motor hybrid system allows the Accord PHEV powertrain to move seamlessly between all-electric EV Drive, gasoline-electric Hybrid Drive; and direct Engine Drive. Fuel efficiency for the 2014 Honda Accord Plug-in Hybrid is expected to exceed 100 MPGe, and it’s also expected to receive an Enhanced AT-PZEV rating from the California Air Resources Board (CARB).

Beyond its function as a full-electric vehicle, owners of the 2014 Accord PHEV will be able to choose two additional driving modes to manage battery capacity and tailor the capabilities of the plug-in Accord to their own commute. In its default upon start-up, the Accord PHEV acts as a pure electric vehicle and will continue on in full-electric mode until battery capacity necessitates the automatic switch to gas/electric hybrid operation. At higher speeds or under high demand for acceleration, the gasoline engine can kick in to provide additional power.

The 2014 Accord Plug-In Hybrid Sedan will feature an electric servo braking system similar to the setup on the Honda Fit EV, which allows for exceptionally natural brake pedal feel, while extending the range over which the regenerative braking can take place. In addition to its efficient powertrain, the Accord PHEV features remarkably swift charging times. The plug-in Accord can be fully charged from a low-charge indication point in less than three hours using a standard 120-volt household electrical outlet, and in less than one hour using a 240-volt “Level-2” charger. The free HondaLink™ EV smartphone application will allow owners to easily monitor the charging state of the Accord PHEV.