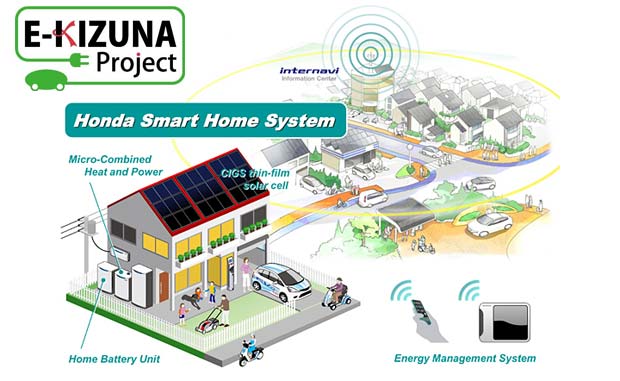 Toshiba Corporation and Honda Motor Co. announced partnership in the demonstration testing of the smart home system that Honda has been conducting in the city of Saitama.

The two companies will jointly conduct demonstration testing with the goal of pursuing the optimization of energy generation and usage.

Since April 2012, as a part of the E-KIZUNA Project run by the city of Saitama, Honda has been conducting demonstration testing using two smart home system equipped houses built on land adjacent to Saitama University with the goal to further reduce CO2 emissions from people’s everyday lives including mobility. The third demonstration house, which will be completed before the end of the next fiscal year (ending March 31, 2014), will be equipped with energy management systems of both Toshiba and Honda.

The two companies strive to establish a smart home system which realizes both optimized energy management in everyday life and continuous power supply at the time of a disaster and emergency through optimal control of energy generation devices including smart home appliances which comply with the ECHONET Lite standards, solar power generation system and gas engine cogeneration system, as well as household batteries and electric vehicles.

In the demonstration testing, Toshiba will utilize its smart meter and provide energy management within the community created by networking the three testing houses as well as the technology which controls appliances in each house. Honda will provide energy generation and storage technologies as well as vehicles. The two companies also will explore the possibility of collaborating their cloud-based services, realizing the interconnectivity of their products and reusing Toshiba’s SCiBTM battery installed in Honda EVs.

In the effort to address global warming and realize an energy-saving society, an increasing amount of demonstration testing and commercially-based projects are being conducted all around the world to pursue the optimization of social infrastructures such as electricity, water, gas and transportation. In addition, awareness and interest in household energy use are increasing. In light of this situation, the two companies will strive to establish an optimal smart home/smart community through collaboration between Toshiba appliances used inside and outside of the home and energy management technologies which control such appliances comprehensively, and Honda mobility, telematics and energy generation/storage technologies.

In addition to collaborating in the demonstration testing, the two companies will explore possibilities of joint technological verifications and establishment of collaborative business models which will realize safe and enjoyable mobility and everyday lives of people in the smart community.