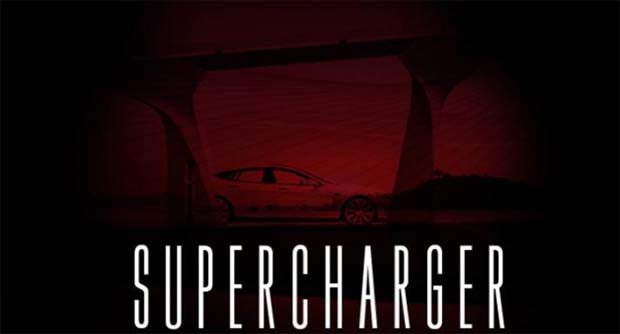 Tesla Motors, will reveal the Tesla Supercharger and deployment plans, providing a solution for the electric vehicle’s long-distance road trip that only Model S can achieve.

What is known for sure is that the Tesla Supercharger can fully charge up the top-of-the-line Model S Performance (with a 265 mile range and a 85 kWh battery) in one hour, if not less.

Tesla Motors, the California-based maker of Model S, will reveal the Tesla Supercharger and deployment plans, providing a solution for the electric vehicle’s long-distance road trip that only Model S can achieve.

More on Tesla Tesla Motors’ goal is to accelerate the world’s transition to electric mobility. Palo Alto, California-based Tesla designs and manufactures electric vehicles (EVs) such as the Tesla Roadster and Tesla Model S, as well as EV powertrain components for partners such as Toyota and Daimler.

With the most energy-dense battery pack in the industry and best-in-class aerodynamics, Model S has the longest range of any production electric car in the world. Model S comes with three battery options to fit the unique needs of different drivers. The 85 kWh Model S has been certified by the U.S. EPA with a range of 265 miles*, giving it the best electrical vehicle range in the industry.

Model S is the first premium sedan designed from the ground up to take full advantage of electric vehicle architecture. A revolutionary powertrain sits under the floorboard of Model S, creating an ultra-low center of gravity. Paired with an aluminum body engineered for superior handling, Tesla has created a vehicle that raises the bar for performance and efficiency while meeting the highest standards for safety.

Without an internal combustion engine or transmission tunnel, the interior of Model S has more cargo space than any other sedan in its class and includes a second trunk under the hood. Model S seats five adults and two children in optional rear-facing child seats. Model S Performance models accelerate from 0 to 60 mph in as little as 4.4 seconds. The interior features a 17″ in-dash touchscreen with internet capabilities, allowing for streaming radio, web browsing and navigation.