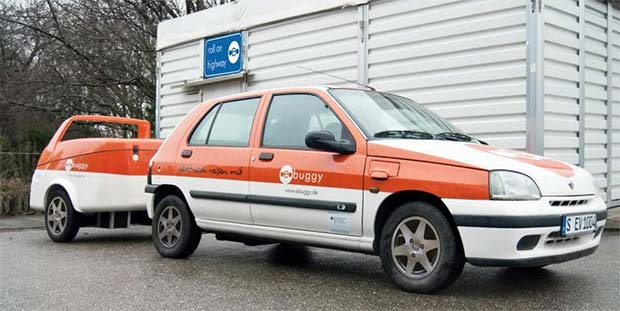 Today’s electric cars are at a disadvantage due to the lack of infrastructure to charge them, but ebuggy says offers electric cars unrestricted mobility on motorways, with no range limitations.

The trailer arrangement enables buyers to go for a relatively low-cost electric car with a small, lightweight battery for local driving (where range is not an issue). To go on a long trip, an ebuggy trailer a much larger battery can be hitched up at an ebuggy relay station and the journey continued using the energy from the ebuggy.

On arrival in the destination area, the ebuggy is dropped off again at the final service station. ebuggy can be exchanged whenever necessary during longer journeys so that unlimited ranges can be achieved. And all this within two minutes.

“ebuggy allows the automotive industry to build reasonably priced electric vehicles with a smaller battery, because ebuggy is available for longer distances. As a result, electric cars will become cheaper than vehicles with a combustion engine and e-mobility will be able to assert itself rapidly and dynamically,” says Dr. Manfred Baumgärtner, Managing Director of ebuggy GmbH.

ebuggy plans a network of ebuggy relay stations at which drivers of electric cars can hitch up battery trailers. The prototype is finished and has proved effective.

The ebuggy prototype was constructed with the support of Germany’s Ministry of Economics and Technology (BMWi) and project partners such as the Fraunhofer Institut IPA and Stuttgart University.[wzslider height=”400″ lightbox=”true”]