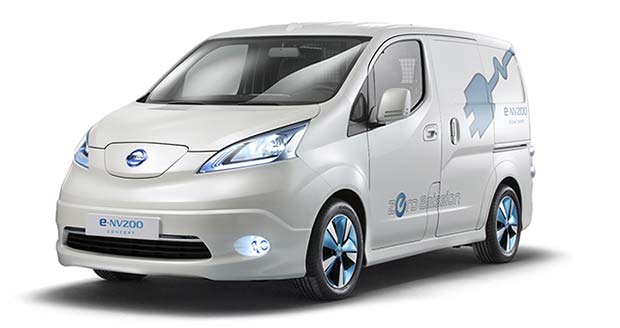 Nissan said that as well as a panel van, e-NV200 will be available as a passenger-carrying combi and as the family-oriented seven seat Evalia.

The Nissan e-NV200 shares its major drivetrain components with the innovative Nissan LEAF. Silent, zero emission power is supplied by a lithium-ion battery composed of 48 compact modules and a high-response 80kW AC synchronous motor that generates 280Nm of torque.

Despite its compact overall dimensions, e-NV200 will have a class leading and highly practical load volume of 4.2m3 with the capability of carrying two standard Euro pallets between the rear wheel arches while the 2m cargo length means it can carry 20 standard Euro boxes. Its modest width, however, will allow e-NV200 to squeeze through crowded city streets more easily.

Nissan’s next zero-emission vehicle – the second of four promised by 2014 – has already proved its worth during real-world prototype testing. The prototype testing, which started in 2011, will continue through 2013.

As part of its display at the Hanover show, Nissan partnered with FedEx Express to showcase an e-NV200 with the company’s distinctive purple and orange logo.

The company has been working with FedEx Express since December 2011 to test the e-NV200 in real world operations to help shape development of the 100% electric compact delivery vehicle. FedEx Express currently operates 130 all-electric vehicles worldwide, making the company an ideal collaborator for this research and development initiative.

Nissan and FedEx Express engineers started working together in December 2011 by co-testing the e-NV200 prototype on the streets of London, UK. The test recently expanded to Yokohama, Japan, in order to obtain additional real-world driving feedback.[wzslider height=”400″ lightbox=”true”]