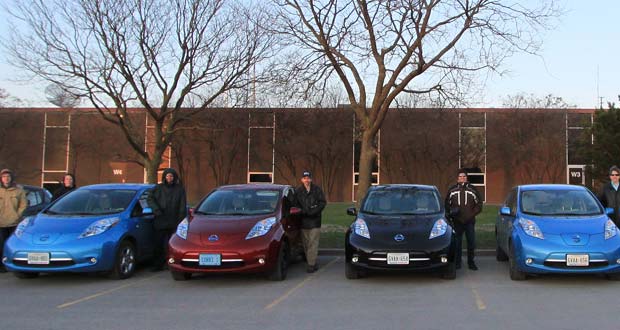 Last week General Motors admitted not only that it was losing money on its Chevy Volt EV, but that it had been forced into offering potential buyers industry leading incentives to get the electric car moving off of its lots.

According to a report assembled by automotive pricing website TrueCar.com, the average incentive offered on the Volt in August was $10,000. Keeping in mind the fact that Volt purchasers also got a $7500 tax credit from the government, anyone who purchased a Volt last month really paid only $21,645 or 55% of its MSRP of $39,145.

This week, also citing slow sales, the Nissan Motor Company announced they too would be cutting prices on their electric car.

Reports show that Nissan is offering consumers the option to lease the all-electric Leaf for as little $219 a month for 32 months with about $3000 down (and an excellent credit score of course). Similarly, GM is currently offering a lease on the Chevy Volt for only $249 a month. Considering the MSRPs of these vehicles, at $35,200 and $39,145 respectively, are comparable to prices of entry-level luxury vehicles—these lease rates are extremely good deals.

For comparison purposes, a Mercedes-Benz C250 Sport Sedan with an MSRP of $35,350, is being “specially” offered as a lease on Mercedes-Benz’s website for $359 a month for 36 months. Similarly, for the same period of time you can lease a 2013 128i Coupe from BMW for $369 a month. You’ll pay over $100 more per month for one of these luxury vehicles than you would to lease either the Volt or the Leaf. Plus, because gas is so much more expensive than electricity right now, you’ll probably save at least twice that much in fuel costs per month.

Another upside to these attractive leases is that they are a great way for people who are unsure if they’re ready for an EV to get their feet wet instead of jumping in head first. By leasing an electric car instead of buying one, you’re only locked in for a few years at most. Additionally, electric cars haven’t been around long enough for us to know how much of their value they’ll retain three or five years down the road. With a lease, you won’t have to worry about that. While it is certainly unfortunate electric car sales are so slow at the moment, these price cuts might be the beginning of what we’ve all been waiting for—for the electric car to be a realistic option for everyone who is thinking of purchasing a new vehicle.

This post was contributed by Brittany Larson of Hudson Nissan.