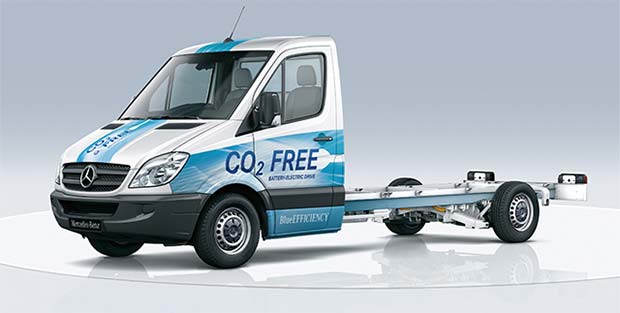 Mercedes-Benz is further increasing its lead in the electrically powered van sector: at the 2012 International Motor Show for commercial vehicles in Hanover with the prototype of the Sprinter E-CELL having its world premiere.

First the Vito E-CELL panel van, then the Vito E-CELL crewbus and now the Sprinter E-CELL – consistently and step by step, Mercedes-Benz is continuing to develop vans with battery-electric drives.

The platform was provided by the Vito E-CELL: two years ago, the first deliveries to customers were made, and now approximately 500 Vito E-CELL vehicles are now already in proper use. They have proved their worth in extensive customer tests. This allowed for the technology to be successfully further optimised and for the sales and distribution network to be extended.

The Vito E-CELL is the first electrically powered van to be produced in series by a car manufacturer and is now available in more than fifteen European countries. The recent introduction of the Vito E-CELL crewbus, which has space to seat seven, has once again greatly increased the vehicle’s potential fields of operation. The vast amount of expertise gained from the Vito E-CELL was used for the development of the Sprinter E-CELL.

The prototype of the Sprinter E-CELL is an answer to the positive reactions to the Vito E-CELL.

The Sprinter E-CELL multiplies the possibilities for locally emission-free transport, because it is just as suited to use as a chassis cab as it is for use in conjunction with attachment bodies. This is of particular importance to spacious delivery vans for supplying inner cities, pedestrian precincts, or towns with restricted vehicle access, for example. The Sprinter E-CELL is equally suited to use as a drop-side body with double cab for use in landscape gardening within green zones. The Sprinter E-CELL is of interest to a large number of businesses and trades.

The technology of the Sprinter E-CELL is similar to that of the Vito E-CELL. However, it had to be carefully adapted to the specific characteristics of this highly demanding weight class as well as to a completely different chassis with rear-wheel drive.

The permanent magnet synchronous motor of the Sprinter E-CELL can reach a constant output of 70 kW (short-term peak output of 100 kW). Due to the design of the motor, the 220 Nm torque (short-term 270 Nm) is available in its entirety from a standstill, thus ensuring dynamic starting performance. The Sprinter E-CELL draws its energy from two lithium ion batteries, each with 93 cells and a combined capacity of 35.2 kWh.

The particularly powerful charger of the Sprinter E-CELL supplies 22 kW at a current of 32 amps. When connected to a 400-volt power source, the batteries can be charged in less than two hours. This considerably extends the possible areas of use of the Sprinter E-CELL, as it does not require time-consuming overnight charging. The battery charging socket is located on the driver’s side, at the bottom of the B pillar instead of the usual tank filler neck.

The top speed of the Sprinter E-CELL is limited to 80 km/h (50 mph) in favor of an extended range. This means it is not only suitable for inner city areas but can also be used for inter-city journeys or short motorway stretches. Its preferred area of use, however, is inner cities and towns. The range was designed with this in mind. With an NEDC energy consumption of 27 kW/h, the range is approximately 135 km (84 miles). This is sufficient for most uses, as customer tests with the Vito E-CELL have shown. Daily journeys of up to around 100 km (62 miles), as are most common in short-radius distribution, the trades and the service sector, can be completed risk-free by the Sprinter E-CELL.

As the batteries are located in robust containers between the axles and below the frame, neither the luggage compartment of the closed Sprinter nor its good body-mounting ability are impaired. With a maximum permissible gross vehicle weight of 3.5 tons, the payload of the Sprinter E-CELL can be up to 1200 kg, depending on the body. Ground clearance and angle of approach are not restricted.

The Sprinter E-CELL, like every other Sprinter, will be fitted with the newest generation of the ESP Electronic Stability Program with all its functions. In addition there is a high level of protection of the high-voltage power system.

The prototype of the Sprinter E-CELL at the IAA is a chassis version with driver’s cab and the middle wheelbase of 3665 mm. This enables not only a presentation of the electric drive components, but also, thanks to its good body-mounting ability, simultaneously shows the possibilities for a wide range of uses.

The design of the Sprinter E-CELL is suitable for many other variants: with the long wheelbase, as a double cab and with a number of bodies. There are also the closed versions, equally with a wide variety of bodies. Other weight variants might also be considered.

During and after the IAA, Mercedes-Benz will examine customer reactions to the new Sprinter E-CELL closely. Just like every other Mercedes-Benz, the Sprinter E-CELL will be carefully prepared for practical use before it is launched. The usual rigorous summer and winter tests are already planned, as are crash tests which the Vito E-CELL also needs to pass successfully.