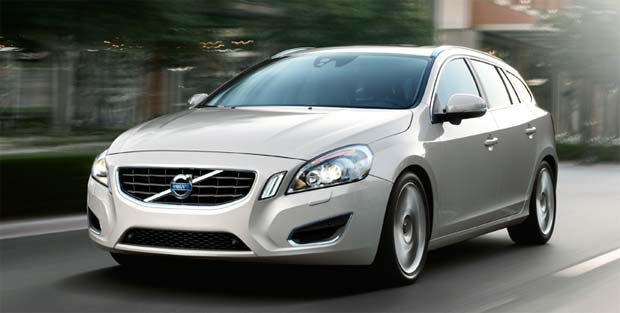 Volvo will be showcasing its new V60 Plug-in Hybrid at this year’s Moving Motorshow and Goodwood Festival of Speed, held between the 28th June and 1st July 2012 in the grounds of Goodwood House, allowing specially selected UK customers their first chance of driving the ultra-efficient estate.

The front wheels of the Volvo V60 Plug-in Hybrid are powered by a five-cylinder 2.4-liter turbo diesel producing 215 hp and maximum torque is 440 Nm, while the rear axle is powered by an electric motor producing 70 horsepower, all while only producing 49g/km of CO2 on the combined cycle.

The driver can select the required driving mode via three buttons that gives the car three entirely different temperaments: Pure, Hybrid or Power.

–  In Pure mode the car is powered solely by its electric motor as much as possible. If the battery pack has been recharged with electricity from renewable sources, its range is up to 32 miles with no carbon dioxide emissions from the tailpipe. The electric range varies with terrain, climate and driving style.

–  Hybrid is the standard setting whenever the car is started. The diesel engine and electric motor cooperate to ensure optimal balance between driving pleasure and environmental footprint. CO2 emissions (NEDC, mixed driving cycle for certification) are just 49g/km and it has a total range of up to 621 miles.

–  In Power mode the technology is optimised to give the car the maximum possible power. The diesel engine and electric motor have a total power output of 215+70 horsepower and maximum torque of 440+200Nm. The electric motor’s lightning-quick torque delivery contributes to the car’s acceleration from 0 to 62mph in 6.2 seconds.

The Swedish manufacturer will also be presenting its new five-door hatchback V40 at Goodwood, which is the first car in the world to feature a pedestrian airbag. This innovation helps reduce the severity of pedestrian injuries in the event of an impact and could be extended across the Volvo range. Volvo has set a goal of making sure no one is injured or killed in one of its cars by 2020.