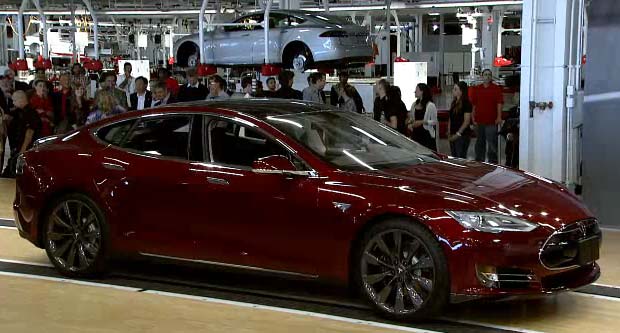 The Tesla Model S electric sedan is expected to be the best electric car ever to hit the road.

The 2013 Model S has received a rated range of 265 miles and a combined efficiency of 89 MPGe (miles-per-gallon equivalent) from the EPA, establishing the luxury sports sedan as the electric vehicle with the longest battery range on the market.

The Model S sedan was rated 88 MPGe in the city and 90 MPGe on the highway, for a combined rating of 89 MPGe. The efficiency rating of Tesla’s Model S is lower than Fit EV at 118 MPGe, Mitsubishi ‘i’ at 112 MPGe, the Ford Focus Electric at 105 MPGe and the Nissan Leaf at 99 MPGe.

The range and efficiency ratings were issued for the high-end version of the Model S, which is outfitted with an 85 kWh battery pack that starts at $77,400 or the top-of-the-line Signature Performance version, which starts at $92,400 before a $7,500 federal tax credit.

Tesla also is producing two other versions of the Model S equipped with 40 kWh and 60 kWh battery packs.

All models include a 17 inch touch screen infotainment display on the dash and 19-inch wheels, while 19-inch aerodynamic wheels that boost range by another 20 miles are optional and come in at $1,500. All vehicle, media, communication, and cabin controls are displayed on this screen.

The Tesla Model S comes with a single 10 kilowatt charger that delivers up to 31 miles per hour of charging.  For an additional $1500 your Model S can have two chargers, for a total of 20 kilowatts of charging speed, or up to 62 miles per hour of charging, but of course this would require a 240 volt 85 amp circuit. Tesla has also developed the Supercharger for the 85 and 60 kilowatt models, which will be available in a network of Supercharger stations operated by Tesla, and will provide up to 160 miles per 30 minutes of charging, which means fully replenishing the 85 kilowatt-hour battery pack in about an hour.

Tesla and Wells Fargo will work together to provide competitive retail financing options to Model S reservation holders in the United States, increasing the number of ways a customer can purchase Model S. While the relationship is not exclusive, Wells Fargo is the first financial institution to back financing for the Model S.

All Tesla Model S models have an 8 year warranty on the battery pack. The Tesla Model S electric sedan will be made at a factory in Fremont, California.[wzslider height=”400″ lightbox=”true”]