From Quick Charge to No Charge in London 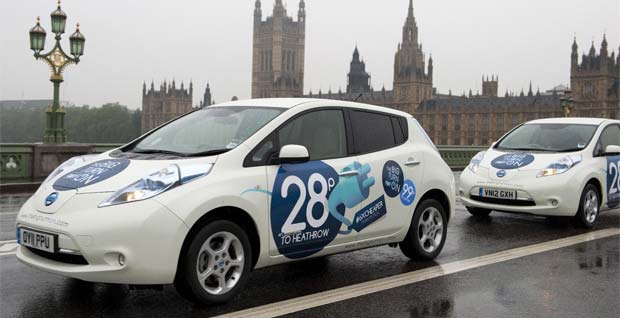 A fleet of zero-emission Nissan LEAFs will be driving around London on the 23rd and 24th June, offering free ‘taxi’ rides.

To grab a ride, all a prospective passenger has to do is send a Tweet that incorporates the hashtag ‘#6XCHEAPER’ and their chosen destination. Nissan is also using the activity to gather consumer feedback on a potential taxi of the future.

The use of Twitter is an integral part of Nissan’s ambitious campaign, ‘The Big Turn On’, which is spreading the EV message via social media channels and aimed to get one million consumers switched onto electric driving, in just 100 days. The 1 million ‘turn ons’ target was achieved on the 20th June, 18 days ahead of the original target.

The ‘#6XCHEAPER’ tag emphasises that fuelling an electric vehicle is six times cheaper than a similar sized petrol car. Using off-peak electricity, Nissan estimates it costs just 1.75 pence in fuel to travel one mile in a Nissan LEAF, but more than 10 pence per mile in a conventional car.

“This is part of a campaign designed to get people to turn on to 100% electric driving by busting many of the myths and highlighting the many benefits of electric cars, including incredibly low fuel costs.

By offering free taxi rides, we aim to show hundreds of people just how practical and affordable the Nissan LEAF is to run. As each journey costs us so little, we’re not charging passengers – there’s no point quibbling over a few pence.” said Jim Wright, Managing Director of Nissan GB.

The fleet of Nissan LEAF EVs will be based at their very own ‘taxi rank’ at the Truman Brewery, near Liverpool St Station and will be giving free rides to destinations across London. That means as far west as Turnham Green or to the O2 Arena in the east. The Nissan LEAF cabs will go south of the river as far as Clapham and as far north as Hampstead. They will be operating from 10am to 6pm on both Saturday and Sunday and driven by professional drivers from car service operator, Climate Cars.

All Tweets sent with the ‘#6XCHEAPER’ hashtag will be monitored and winners of the free rides chosen at random to avoid queues. Each journey will be logged and passengers shown just how much they would save in fuel costs by going electric.