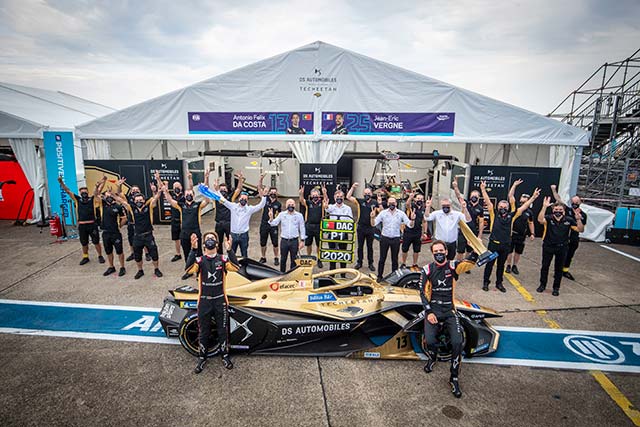 DS Automobiles, the first premium manufacturer involved in the Formula E championship, has been breaking record after record ever since the electric-only competition was opened to manufacturers.

DS Automobiles now holds the record for most consecutive titles (Two Teams and Two Drivers), most pole positions (13) and most first row positions for a single team (two with DS TECHEETAH). DS Automobiles is also the only manufacturer to win ePrix races every year since 2016.

At the end of the 2019-2020 season, with four wins, nine podium finishes, five pole positions and three fastest laps across eleven ePrix; the DS E-TENSE FE20s beat out the Nissan IM02, the Mercedes-Benz EQ Silver Arrow 01, the Audi e-tron FE06, the BMW i.FE20, the Jaguar I-Type IV, the Porsche 99X Electric, the Mahindra M6Electro, the PENSKE EV-4 and the NIO FE-005. Never has one team (+ 77 points) and one driver (+ 71 points) finished the season so far out ahead of the competition.

Since 2015, DS Automobiles has leveraged its Formula E expertise to develop electrified models that are recognised as benchmarks in their respective categories. Its selection of technologies for the electric motors, batteries and power monitor, as well as its software management system, were all drawn from its experience in the competition. The all-electric DS 3 CROSSBACK E-TENSE, as well as the DS 7 CROSSBACK E-TENSE 4×4 300 hp and the DS 7 CROSSBACK E-TENSE 225 hp plug-in hybrids, have already made DS Automobiles one of the top multi-energy brands.

The application of electric technologies to road vehicles generates significant efficiencies, turning high-end luxury into high performance. DS Automobiles will continue down the path of electrification with the upcoming DS 9 E-TENSE, a line of plug-in hybrid saloon cars that can deliver up to 360 horsepower.

Béatrice Foucher, CEO of DS Automobiles: “DS Automobiles’ involvement in Formula E racing has been a great success. In 2015, the goal was to accelerate the development of our electrified models. Since last year, our entire line has had fully electric or plug-in hybrid versions. These titles, which were won in the face of competition from the Germans – among others – will also boost our profile and help us gain market share. I commend the exceptional performance turned in by this team of champions, who embody our technological and strategic know-how. Congrats to DS TECHEETAH for winning these FIA titles, and to DS Performance for designing the best of the fully electric racing cars.”

DS TECHEETAH will be defending its titles next season, once again with António Félix da Costa and Jean-Éric Vergne.