Sales of zero- and low-emission cars highly unbalanced across EU 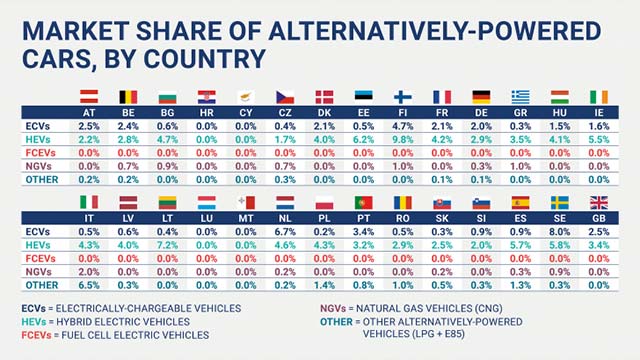 Sales of alternatively-powered vehicles are following a highly uneven pattern across EU member states, according to new findings from the European Automobile Manufacturers’ Association (ACEA).

Indeed, the consumer uptake of battery electric, plug-in hybrid and hybrid electric passenger cars, as well as those fuelled by natural gas or hydrogen, differs strongly from country to country as a recent report points out.

“Although the average EU market share of alternatively-powered vehicles is going up, the huge discrepancies across Europe are extremely worrisome,” stated ACEA Director General, Eric-Mark Huitema. “As we push ahead in the transition to zero-emission mobility, we need to ensure that no countries and no citizens are left behind.”

This picture is very representative, as the consumer uptake of electrically-chargeable cars is particularly low in Central and Eastern Europe, with Poland for instance selling hardly any (0.2% of total passenger car sales). An ECV market share of more than 1.5% is something that is exclusive to Western European countries.

When it comes to electrically-chargeable vehicles, the ACEA report highlights not only an east-west divide, but also a marked north-south distinction. Indeed, electric cars represented less than 1% of total sales in Italy and Spain last year – the third and fourth largest EU economies respectively.

ACEA’s report also shows that sales of cars running on natural gas are mainly concentrated in Italy and Germany (74% of the EU total), and that fuel-cell cars account for a negligible share of total EU passenger car sales for the time being.

If the extremely ambitious 2025 and 2030 CO2 targets set by the EU are to be achieved, sales of all types of alternatively-powered vehicles will have to pick up rapidly in all member states.