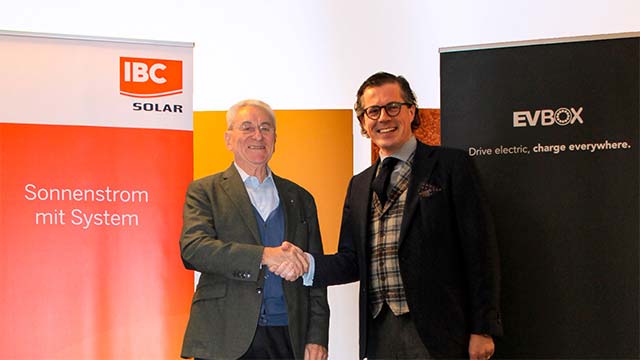 As part of the agreement, EVBox will deliver IBC Solar, located in Upper Franconia (Germany), with electric vehicle charging stations for private and public use. These stations will be integrated into the existing system of photovoltaics and energy storage, and will serve as an example of how companies can collaborate across sectors.

“EVs will only produce less emissions if they are being powered by clean energy, such as solar-generated power.” Udo Möhrstedt, Founder and CEO of the photovoltaic company IBC Solar, is convinced about this. “When the eMobility market takes off in 2018, photovoltaics, EVs, and charging infrastructure will have to be part of the same discussion.”

With this, Möhrstedt is paving the vision and future direction of the solar industry as a photovoltaic pioneer. Research shows that when an electric vehicle is powered with clean energy, it emits less CO2. When comparing a standard diesel car to its EV equivalent, the EV would have paid off its CO2 emissions due to manufacturing after only 30,000 kilometers.

As of the beginning of February, this new partnership between EVBox and IBC SOLAR aims to combine their strengths to become strategic partners in Germany, among other European countries. EVBox’s charging stations can be combined with photovoltaics in a smart and simple way. With a mobile app, customers are able to configure their charging times to maximize the usage of the solar power available in the grid.

Private households and businesses that invest in photovoltaics will save greatly by also using solar energy for their vehicles. At a starting cost of 10 cents per kWh, a passenger car powered with solar will only cost around 2 euros for a 100-kilometer drive, which is half the cost of using power from a mixed or non-renewable grid.

Kristof Vereenooghe, CEO of EVBox, adds to this: “We are very happy to have signed this partnership with IBC Solar, one of the most important players in the field of renewable energy. Together, we believe we can advance eMobility in Germany, Austria, and Switzerland and help shape the future of transportation. By combining our EVBox charging stations with IBC Solar’s solutions, customers will from now on be able to combine photovoltaics, power storage and electric vehicle charging. The future of transport is very bright indeed!”