Hyundai NEXO will have range of 609 kilometers 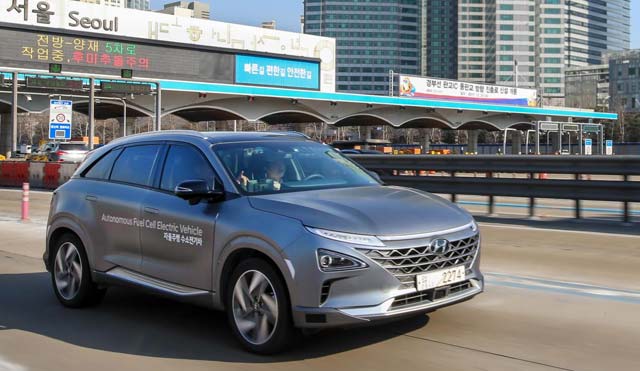 It’s been a busy start to the year for Hyundai’s next-generation fuel cell vehicle NEXO, scheduled to be released in Korea next month. Unveiled at CES 2018 as the technological flagship of Hyundai’s growing eco-vehicle portfolio, the NEXO SUV model is set to spearhead Hyundai Motor’s plans to accelerate development of low emission vehicles.

This is in line with Hyundai Motor Group’s renewed goal of introducing 38 eco-friendly models to global markets by 2025.

The all-new Hyundai NEXO combines the practicality of an SUV with clean advanced fuel cell technology. The NEXO is capable of travelling 609 kilometers (370 miles) on a single charge, the best among fuel cell-powered vehicles in the world. This next generation vehicle offers the most advanced technology on the market with various advanced driver assistance systems and the strongest powertrains in the segment.

Throughout February, visitors to PyeonChang will have the opportunity to experience Hyundai’s world-first, next-generation self-driven fuel cell electric cars. All five vehicles that completed the world’s-first journey will be available for visitors to experience around the urban roads of PyeongChang.

Pure design visualizing innovation
The all-new NEXO is characterized by a pure and calm design emphasizing its streamlined silhouette and a floating roof. A pure shape engineered to be efficient, yet beautiful, reflecting the style of an SUV.

The seamless front appears wide and clearly defined with composite horizontal full LED daytime running lights. The headlamps are linked by a continuous, thin line of light underlining the elegant and horizontal front layout. Triangular fog lights below the headlamps emphasize the progressive character of the car. Hyundai’s signature Cascading Grille has been widened to increase the air intake, rounding off the strong visual impact of the front.

The seamless design continues over the side to the rear. The thin, floating roof is emphasized by the large daylight opening and slim D-pillar that runs into the rear spoiler. The rear features an almost triangular shaped window that wraps to the side and a long, prominent spoiler with an integrated rear wiper creating a distinct look. The triangular design of the rear headlamps combined with the horizontal layout of the rear gives the car a strong stance.

NEXO is the first Hyundai vehicle with integrated flush door handles. This special handle accomplishes a clean design of the car’s side and improves the airflow. Drivers can opt for automatic deployment of the door handles, either for the driver’s door or for all four doors. The mechanism is automatically deployed after five seconds when the car is started. When the car decelerates to 3 km/h, the handles retract automatically.

Futuristic interior
The interior continues the car’s horizontal layout in the dashboard. Most prominent is the wide black dashboard that houses two large LCD displays which add up to a size of 12.3 inches. The left display holds the digital instrument cluster to show speed, fuel level and driving efficiency. The right screen comes with a new split-screen function and a new home screen for the navigation, connectivity and infotainment features.

The world’s first unified three-tank system with its small tank size allows for better space usage. Additionally, the wheelbase is increased by 150 mm compared to the ix35 Fuel Cell. This results in the best total interior space of any current fuel cell electric vehicle and creates a fully flat luggage area with a luggage capacity of 839 liters.

The design of the all-new NEXO is optimized to reduce the drag coefficient. Multiple aerodynamic features are discreetly integrated into the front, side and rear. The aerodynamics is enhanced by wheel air curtains in the front fender, retractable door handles, a full body undercover and large air ducts as part of the D-pillar. The overall drag coefficient is as low as 0.329.

The engine’s oxygen flow is met by the large opening of the cascading grille at the front and small air intakes at the rear of the car.

Most advanced fuel cell powertrain with the best driving range
The Hyundai NEXO was designed with new vehicle architecture that benefits the car in many ways: the car is lighter; the battery is relocated to the trunk and the fuel cell system layout is improved.

NEXO is the perfect daily use zero-emission vehicle—living up to Hyundai’s development philosophy of optimum efficiency with zero sacrifice in driving performance. The fuel cell powertrain is lighter and has improved packaging. It achieves a maximum power output of 120 kW (163 PS) and a torque of 395 Nm. NEXO accelerates from 0 to 100 km/h in 9.2 seconds and reaches a class best top speed of 179 km/h.

The eco-friendly fuel cell powertrain boasts an increased rate of hydrogen utilization and component efficiency. This results in the world’s best system efficiency of 60 percent. The NEXO has the best driving range of 609 km under Korean certificate standard—better than any other fuel cell or electric car. This range is comparable to that of an internal combustion engine and allows drivers to travel long distances without nervousness about range.

The newly developed vehicle platform integrates three identical tanks with a volume of 52.2 liters of hydrogen per tank, resulting in a world-class storage density and higher fuel capacity. Despite the higher storage capacity, the all-new NEXO takes only five minutes to refuel.

Designed to handle extreme temperature and environments, the NEXO will cold start even when the outside temperature drops to -30 degrees Celsius in an industry-leading 30 seconds.

A highly durable membrane electrode catalyst and new drive control technology gives the NEXO outstanding and unprecedented durability that is on a par with an internal combustion engine vehicle of at least 10 years and 160,000 kilometers.

The efficient and durable high-performance air filter can filter micro-particulates smaller than particulate matter (PM) 2.5 in size. In short, when air filters through the NEXO, 99.9 percent of particulates are purified and the instrument cluster displays how much you have contributed toward cleaning the environment around you.

Blind-spot View Monitor (BVM)
Hyundai’s Blind-spot View Monitor is an industry-first technology. On a center cluster screen, it shows drivers the rear and side views of NEXO using cameras while changing lanes in either direction. The system uses wide angle Surround View Monitors (SVM) on each side of the vehicle to monitor areas that cannot be seen by a traditional rearview mirror. Hyundai is the first automaker to provide driver’s video footage from both sides of the vehicle.

Lane Following Assist (LFA) and Highway Driving Assist (HDA)
Lane Following Assist is an all-new technology for Hyundai and it debuts in the NEXO. LFA automatically adjusts steering to help keep NEXO centered in its lane of travel. LFA can keep NEXO centered at speeds between 0 and 145 kilometers per hour on both highways and city streets. When paired with Hyundai’s Highway Driving Assist (HDA) which utilizes sensors and map data to ensure safe operation as well as automatically adjust speed in limited environments, drivers will be able to traverse long distances with greater ease and improved safety.

Remote Smart Parking Assist (RSPA)
RSPA enables NEXO to autonomously park or retrieve itself from a parking space with or without a driver in the car. The RSPA system can even back a NEXO into a parking spot by itself with a touch of a button from the driver. When faced with any challenging parking scenario, NEXO drivers will be able to park with complete confidence and accuracy.

Five Hyundai vehicles completed the journey. Three vehicles were based on Hyundai’s next-generation fuel cell electric NEXO SUVs and the other two were Genesis G80 autonomous vehicles. All vehicles were equipped with Level 4 self-driving technology, as defined by the SAE international standards, and 5G network technology. The vehicles used for the demonstration were “futuristic vehicles” that closely represent Hyundai’s three visions for future mobility: connected mobility, freedom in mobility and clean mobility.

The demonstration started in Seoul on Feb. 2 with the CRUISE and SET buttons being pressed on the autonomous-driving steering wheel of each vehicle, at which point the cars immediately switched to self-driving mode and began the 190 km journey to PyeongChang. Entering the highway, the vehicles moved in response to the natural flow of traffic. They executed lane changes and overtaking maneuvers, and navigated toll gates using Hi-pass, South-Korea’s wireless expressway payment system.

These vehicles featured a number of advanced technologies that enabled them to recognize surrounding vehicles more accurately, make better judgments at junctions and at branching roads. The vehicles navigate through toll gates by accurately calculating the toll gate’s width and position, and precisely pinpointing the vehicle’s position on a map by using external sensors fitted for situations when the GPS signal was interrupted, such as going through long underground tunnels.

This demonstration brings Hyundai Motor Group, which includes flagship units Hyundai Motor and Kia Motors, a step closer to the commercialization of the SAE standard Level 4 compliant autonomous-driving system in smart cities by 2021. Hyundai also plans to commercialize the technology for fully autonomous driving by 2030.